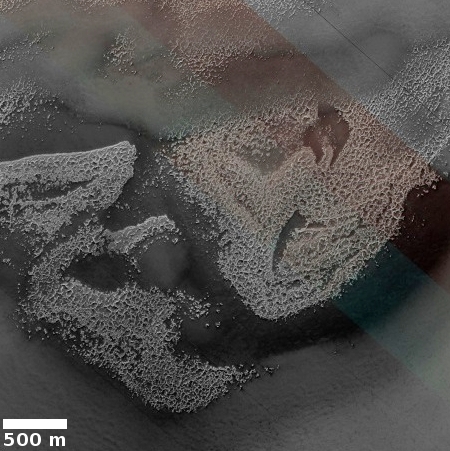 Time for a cool image that makes no sense. The photo on the right, cropped to post here, was taken by the high resolution camera on Mars Reconnaissance Orbiter (MRO) on November 15, 2019 of the floor of a crater, dubbed Dokka Crater, located in the high latitudes of the Martian northern lowlands. Uncaptioned but labeled “Undulations on Dokka Crater Ice Dome,” it shows a region of weird complex wave features, reminiscent of another weird Martian geological feature called brain terrain.

The problem is that brain terrain is generally found in the mid-latitudes, not the high latitudes. Both this feature and brain terrain however appear to associated with ice. In this case, these undulations are occurring on the ice dome that apparently sits inside Dokka crater, which is also likely to be related to the islands of ice found in many high latitude craters on Mars in the southern hemisphere..

In the case of the southern hemisphere ice-filled craters, scientists have found evidence suggesting that global wind patterns might affect their shape and placement within the craters. One wonders if this same factor is a part cause for these undulations in this northern hemisphere crater.

Bernie Marsden & Micky Moody – Till The Day I Die