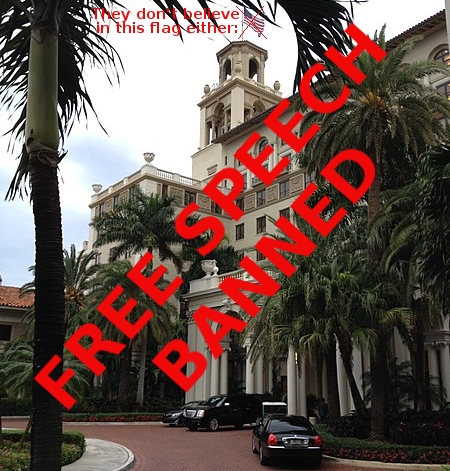 No free speech allowed at The Breakers. Photo: David Broad

The new dark age of silencing: The Breakers hotel in Palm Beach, Florida has banned the conservative David Horowitz Freedom Center (DHFC) from holding an event there, despite the fact that it has allowed such an event every year without problems for the past twenty years.

“After a 20-year relationship with The Breakers resort, the Freedom Center was informed that we would no longer be allowed to have our annual Restoration Weekend event at the resort due to the Center being too controversial,” DHFC President Michael Finch told The Epoch Times. [emphasis mine]

The hotel claims the ban isn’t because of politics, but because the “logistical and operational requirements” of holding the annual event had become more complex. While the hotel was not specific, its statement strongly implied that the increased cost of security against leftist threats of violence caused it to cancel the contract.

In other words, the hotel endorses the heckler’s veto. Threaten violence against someone who disagrees with you and The Breakers will bend over backwards to silence that speaker for you.

I would say that anyone planning to visit Palm Beach should celebrate The Breakers new policy of cowardice and find some other hotel to stay at. It certainly seems that this hotel really isn’t interested in protecting conservatives from violence. It would rather ban them from existence.

Burn witches: What the Southern Poverty Law Center
does to ordinary conservatives.

They’re coming for you next: The conservative David Horowitz Freedom Center and its publication FrontPage Magazine has found itself repeatedly blackballed by various major companies, simply because the center stands for freedom and the principles of western civilization.

In just the past couple of years, MasterCard temporally shut us down, one of our local banks closed our account due to our “controversial positions on issues,” and a brokerage firm closed our account for “unknown reasons.” Amazon will not allow the Freedom Center, a 501 c3 IRS designated nonprofit, to participate in their Amazon Smiles charity campaign because of the SPLC’s [Southern Poverty Law Center] designation of the Center has a “hate group” and now Disqus, the largest networked community platform on the Internet, has canceled our service.

The last example from Disqus involved that company’s sudden decision to cease providing the FrontPage website its commenting service.
END_OF_DOCUMENT_TOKEN_TO_BE_REPLACED