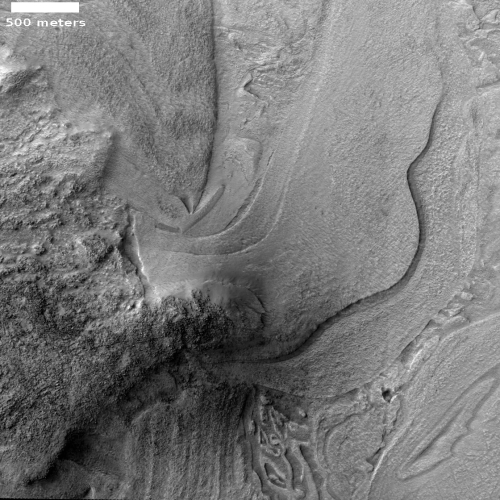 Today’s cool image, rotated cropped, and reduced to post here, might show what the science team for the high resolution camera of Mars Reconnaissance Orbiter (MRO) have labeled “strange banded terrain”, but anyone who has spent any time perusing images of Hellas Basin, what I have labeled the basement of Mars because it has the lowest elevation on the planet, will recognize the features.

They might be inexplicable, but for Hellas Basin they are entirely familiar. Just take a look at some of my earlier posts:
END_OF_DOCUMENT_TOKEN_TO_BE_REPLACED

It was also revealed in this article that ULA plans a total of seven launches in 2019, including today’s launch, the fewest in a year since ULA was formed in 2007 from a partnership of Boeing and Lockheed Martin.

The standings in the 2019 launch race:

The U.S. leads in the national standings 2 to 1 over China.

Capitalism in space: Both SpaceX and Blue Origin scrubbed planned launches today due to what appear to be minor technical issues.

SpaceX was launching a GPS satellite for the military, while Blue Origin was going to fly its New Shepard suborbital spacecraft on its third flight. SpaceX will try again tomorrow, while Blue Origin has not yet announced a new launch date.

Meanwhile, ULA’s attempt to launch a National Reconnaissance Office (NRO) spy satellite tonight with its most powerful rocket, the Delta 4 Heavy, faces bad weather, with only a 20% chance of launch.

UPDATE: I missed a third launch scrub today, Arianespace’s attempt to launch a trio of French military satellites using a Soyuz rocket from French Guiana. They will try again tomorrow.

This means there will be three launch attempts tomorrow, since India plans a launch of its GSLV rocket as well.

Update: The spacecraft has successfully separated from its last stage and is on its way.

Over the next two months, Parker Solar Probe will fly towards Venus, performing its first Venus gravity assist in early October – a maneuver a bit like a handbrake turn – that whips the spacecraft around the planet, using Venus’s gravity to trim the spacecraft’s orbit tighter around the Sun. This first flyby will place Parker Solar Probe in position in early November to fly as close as 15 million miles from the Sun – within the blazing solar atmosphere, known as the corona – closer than anything made by humanity has ever gone before.

The U.S. and China are once again tied in the national rankings, 22 each.

The competition heats up: The CEO of ULA, Tory Bruno, said in an industry publication interview today that the Congressional deal that allows the company to buy 22 more Russian engines for its Atlas 5 clears the way for their eventual transition to the Vulcan rocket and an end to dependence on those Russian engines.

The article is worth a careful read, as it also provides a very detailed look at ULA’s future plans for its Atlas 5, Delta 4 Heavy, and Vulcan rockets. This paragraph was especially interesting:

The next major milestone is determining what engine will replace the [Russian] RD-180. Washington-based Blue Origin is developing the BE-4, a privately funded Liquid Oxygen (Lox) and Liquefied Natural Gas (LNG) engine capable of 550,000 pounds of thrust (lbf); and California-based Aerojet Rocketdyne is creating the AR1, a government-supported Lox/Kerosene (RP-1) engine capable of 500,000lbf. Either replacement will require two engines to match the power of the RD-180. Blue Origin claims its engine, already four years into development, will be flight qualified by 2017, while Aerojet Rocketdyne, having started its development later, says the AR1 will be flight qualified by 2019. Bruno said ULA would make its decision soon.

“Sometime close to the end of the year we are going to down-select, and then move into our Critical Design Review (CDR) and start manufacturing the rocket,” he said.

I strongly suspect they want to go with Blue Origin’s engine, because it is more powerful, farther along in development, and almost certainly less expensive. The question will be whether pressure from Congress, which favors Aerojet Rocketdyne’s engine for pork barrel reasons (Congress is funding it), will force ULA to go with it instead.

In many ways, this rocket’s launch, which you can see in the video embedded below the fold, gives a rough idea of what a Falcon Heavy launch will look like, since the rockets have somewhat similar configurations.
END_OF_DOCUMENT_TOKEN_TO_BE_REPLACED

ULA sets dates for next Atlas 5 and Delta 4 Heavy launches
May 20, 2016 at 6:48 am Robert Zimmerman Points of Information

The competition heats up: ULA has finally scheduled its next Atlas 5 launch for June 24 after completing its investigation of the premature engine shutdown during the previous launch.

The link also provides information on the next Delta 4 Heavy launch, set for June 4.

Delta 4 Heavy moved to launchpad for Orion flight
October 2, 2014 at 10:09 am Robert Zimmerman Points of Information

In preparation for a December test flight of the first Orion capsule, the Delta 4 Heavy rocket has been positioned on the launchpad.

The unmanned Dec. 4 mission, known as Exploration Flight Test-1 (EFT-1), is designed to test out Orion’s critical crew-safety systems, such as its thermal-protection gear. During the four-hour flight, the Orion capsule will fly 3,600 miles (5,800 kilometers) from Earth, then come speeding back into the planet’s atmosphere at about 20,000 mph (32,190 km/h) before splashing down softly in the Pacific Ocean, NASA officials said.

Forgive me if I remain decidedly unexcited. I still believe SLS to be an enormous waste of resources that would be better spent onother things.

Posted on the road south of Phoenix.

The most powerful rocket presently in service, the Delta-4 Heavy, successfully launched a U.S. surveillance satellite this morning.
June 29, 2012 at 1:19 pm Robert Zimmerman Points of Information

The most powerful rocket presently in service, the Delta-4 Heavy, successfully launched a U.S. surveillance satellite this morning.

The booster features three core rocket boosters and is topped with a second stage to place payloads into orbit. It is 235 feet tall (72 meters) and can carry payloads of up to 24 tons into low-Earth orbit and 11 tons to geosynchronous orbits.

SpaceX’s proposed Falcon Heavy would launch about 50 tons into low Earth orbit, making it twice as powerful, should it be built. The next obvious question, which I can’t answer at the moment, is how do these two rockets compare in terms of cost?

NASA picks the Delta 4 Heavy to launch Orion into orbit on its first test flight
November 10, 2011 at 8:03 pm Robert Zimmerman Points of Information

NASA has chosen the Delta 4 Heavy rocket to launch the Orion capsule into orbit for its first test flight in 2014.

So, tell me again why NASA needs to spend $18 to $62 billion for a new rocket, when it already can hire Lockheed Martin to do the same thing? Though the Delta 4 Heavy can only get about 28 tons into low Earth orbit, and only about 10 tons into geosynchronous orbit — far less than the planned heavy-lift Space Launch System rocket — Boeing has a variety of proposed upgrades to Delta 4 Heavy that could bring these numbers way up. Building these upgrades would surely be far cheaper than starting from scratch to build SLS.

Corrected above as per comments below.