Endeavour at Cape, being prepped for next flight

Capitalism in space: Endeavour, SpaceX’s Dragon capsule that was the first to fly two astronauts to ISS, has now arrived at the company’s facility at Cape Canaveral, where it will be inspected, refurbished, and prepped for its next manned flight in the the spring of 2021.

SpaceX teams at Cape Canaveral will remove the exterior panels from the Crew Dragon spacecraft, and begin inspections to assess how the spacecraft weathered its 64-day space mission, according to Benji Reed, SpaceX’s director of crew mission management. “We want to make sure that we kind of dig deep and understand everything that’s gone on with this vehicle, make sure we’re really ready to go, and then do some of the aspects of the refurbishment,” Reed said. “There are some things that we will replace, some things that are standardly replaced, some things that we want to upgrade based on lessons learned, or that were already planned in work.”

SpaceX will still need to build a new trunk for each Crew Dragon mission. The trunk is an unpressurized module mounted to the rear of the Crew Dragon capsule, providing electrical power with solar arrays, and radiators to maintain steady temperatures inside the spaceship.

I guarantee the company will use what it learns in this inspection to improve later Dragon manned capsules. Right now they plan on from 5 to 10 flights per capsule. Since their contract right now only calls for six flights, that likely means the company only needs to build at most three to cover this NASA contract. However, NASA is certain to extend that contract, since six flights will only cover about two to three years, and ISS will be manned longer than that. Moreover, SpaceX has at least two tourist flights booked, so that calls for additional capsules as well.

Either way, we must shift our thinking. These might only be Dragon capsules, but they each get a name because each will fly more than once. It is thus appropriate to use that name instead of just calling them Dragon. 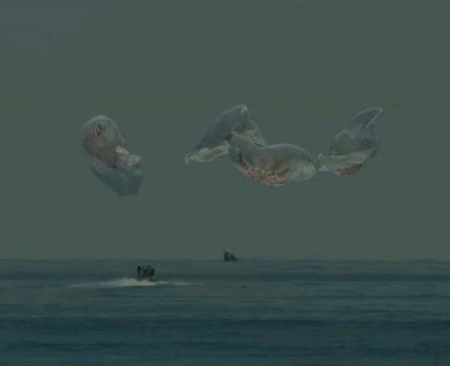 If you go to the live stream to watch recovery operations, note that the boats and ships and persons involved are all property and employees of SpaceX. This is entirely an operation of the private company. The government is not involved, other than NASA’s justified monitoring as SpaceX’s customer.

One cool tidbit for the future. Endeavour is scheduled to fly again, in the spring of 2021. On that flight will be Megan McArthur, the wife of astronaut Bob Behnken, and she will likely sit in the same place he did on his flight.

SpaceX is providing full coverage of the undocking of Dragon from ISS through splashdown tomorrow. I have embedded this below the fold if my readers wish to watch.

If the video is not of the live stream for the splashdown, refresh your browser.
END_OF_DOCUMENT_TOKEN_TO_BE_REPLACED

An evening pause: Endeavour was built in 1934 in England in an attempt to win the America’s Cup from the U.S. It failed, but according to this Wikipedia page came closer than anyone until Australia II finally took the cup from the U.S. in 1983.

Hat tip Cotour, who notes that “the interior was rumored to cost about $1.2 million.”

To get the space shuttle Endeavour to its new home in Los Angeles city officials have decided to cut down about 400 trees along the route.

The future dies to exhibit the past: To get the space shuttle Endeavour to its new home in Los Angeles city officials have decided to cut down about 400 trees along the route.

Several alternatives for the Oct. 12 move were considered but ultimately discarded. Taking the massive shuttle apart would have damaged the delicate tiles that acted as heat sensors. Airlifting the 170,000-pound craft was also ruled out. Not even heavy-duty helicopters could sustain that kind of weight, Rudolph said. A freeway route was considered until engineers realized that the five-story-tall, 78-foot-wide shuttle could not travel under overpasses. “We had to identify a route that had no permanent infrastructures like buildings and bridges,” Rudolph said.

They settled on a final route that will follow Manchester Boulevard to Crenshaw Drive, then onto Crenshaw Boulevard and Martin Luther King Jr. Boulevard — wide thoroughfares with few permanent obstacles. To make way for the shuttle, some trees will be pruned, power lines will be raised and traffic signals will be removed. Inglewood will lose 128 trees, and communities in South Los Angeles about 265 trees, though the exact number has not yet been determined.

Normally I wouldn’t sweat over the removal of some trees, but this is quite disgusting. It once again raises questions about the choice of Los Angeles over Houston for a shuttle.

Opportunity’s target on the rim of Endeavour crater has been dubbed “Spirit Point” by the science team in honor of the now defunct rover.

There was a small fire in Endeavour’s landing gear when it landed last week.

Endeavour not expected to arrive in L.A. until late 2012

To the museum: Endeavour will not arrive in at its Los Angeles retirement home until late 2012.

May 22, 2011 Robert Zimmerman Points of Information

Analysis has shown that the damaged shuttle tile on Endeavour is not a problem for re-entry.

May 21, 2011 Robert Zimmerman Points of Information

The departing Soyuz crew will do a photo-op fly around on Monday to photograph the completed station with a docked shuttle.

May 20, 2011 Robert Zimmerman Points of Information

Gouges and dings found on the tiles on Endeavour’s belly

May 18, 2011 Robert Zimmerman Points of Information

Seven damage sites, mostly small gouges and dings, have been found on the tiles on Endeavour’s belly.

“This is not cause for alarm, it’s not cause for any concern,” said [LeRoy Cain, chairman of NASA’s Mission Management Team]. “We know how to deal with these things in terms of how to assess them. We know that if we get to the point where we need some more data for our assessment, we have a plan for going and doing that.”

Endeavour has docked with ISS

May 18, 2011 Robert Zimmerman Points of Information

Endeavour has docked with ISS.

If you schedule a launch they will come

May 16, 2011 Robert Zimmerman Essays And Commentaries

We arrived at Space View Park in Titusville at around 9 pm, bringing with us camp chairs, a softside cooler with food, cameras, tripods, and light jackets. I also brought a light fleece sleeping bag for additional warmth. Even though it was still twelve hours before launch, the entire shoreline was occupied by a line of people either sitting or lying on blankets or pads. Back from the water and under the trees there were more than a dozen small tents set up.

We found a spot where the line was only one deep and set up our chairs. In front of us were a group of Floridians who had never seen a launch up close, though they told us how they had often watched shuttle launches from their front door. As one of them said, “There won’t be many more chances to see this, so we decided we better come down.”

Also set up in the park under a tarp was a electronic setup with television feeds and speakers linked to NASA TV, run by the Space Walk of Fame Foundation, a volunteer organization that maintains Space View Park and the monuments to space that are on display there. Looking east out across the Indian River was Merritt Island, with the launchpad lit up like a Christmas tree eleven miles distant. To the right was the VAB.
END_OF_DOCUMENT_TOKEN_TO_BE_REPLACED

May 16, 2011 Robert Zimmerman Essays And Commentaries

After fifty years of following space, I finally saw a big rocket launch today. Below is one of the pictures I took of Endeavour as it roared into the sky.

The experience was immensely satisfying, to put it mildly. Watching the shuttle rise up on a column of flame and smoke made me feel young again, my heart racing with excitement. Then Endeavour disappeared into the clouds, and we stood waiting for the roar of liftoff to travel the eleven miles to us. The long wait made this experience far different from what one sees on television. Then the rumble arrived, deep and low, but not as loud as I expected. One experienced launch-watcher explained that the low clouds and humidity might have muffled the sound. Bob Rose said that it was what he expected for this location, and that my expectations were based on those who experienced the launch from the press site at three miles. I think Bob is almost certainly right.

Later today I will put up a longer post, describing what it was like to stand among like-minded space nuts who had traveled from far and wide to see a crew of humans leave the Earth’s gravity and help trace a warm line of life across barren space. May 15, 2011 Robert Zimmerman Essays And Commentaries

We have now set up at Space View Park in Titusville, Florida. The picture below shows what we found when we went by earlier today to scout out the location. As you can see, several people were already there. There were also people who had put up tents, as well as two food vendors.

The launchpad is the tiny spike visible on the horizon directly at the end of the pier. You can also see the VAB to the right. On the way to the Cape

May 14, 2011 Robert Zimmerman Essays And Commentaries

As I write this I am sitting in the back seat of Bob & Brenda Rose’s minivan as we drive down to Florida for Monday’s shuttle launch. We plan to arrive at Space View Park in Titusville around 8 pm Sunday to claim a good location for seating, waiting, and watching the launch. We will be about 11 miles away, but this park is considered one of the better locations for the general public, with a clear view of the launchpad.

May 13, 2011 Robert Zimmerman Points of Information

The countdown has begun for Monday’s shuttle launch.

If all goes well, I will be there to watch it (albeit from 11 miles away). Right now mission controllers estimate a 70% chance of liftoff, depending on the weather.

May 9, 2011 Robert Zimmerman Points of Information

Shuttle launch slips to at least May 16

May 8, 2011 Robert Zimmerman Points of Information

The last launch of Endeavour has now slipped to at least May 16.

Endeavour launch could be as late as May 13

May 4, 2011 Robert Zimmerman Points of Information

The last launch of Endeavour could be delayed to as late as May 13.

May 3, 2011 Robert Zimmerman Points of Information

The very last shuttle launch, scheduled for June 28, may be delayed due to the Endeavour launch delay.

Shuttle launch slips to at least May 10, possibly later

May 2, 2011 Robert Zimmerman Points of Information

Endeavour’s last launch has slipped to at least May 10, possibly later.

Endeavour launch delayed by NASA until May 8 at the earliest

May 1, 2011 Robert Zimmerman Points of Information

The launch of space shuttle Endeavour has now been delayed by NASA until May 8 at the earliest.

Technical problems have delayed the last launch of the shuttle Endeavour at least 48 hours.

The countdown for Endeavour’s last launch has begun

The countdown for Endeavour’s last launch has begun.

Giffords makes sense, as her husband will be on the flight. Obama is merely taking another of his numerous breaks from work to get a last look at a program he helped kill.

The Daily Beast reports today that the last flight of the shuttle Endeavour has been delayed due to a schedule conflict with a Russian Progress freighter.

Note that this has not yet been confirmed by NASA.

Update from spaceref: NASA has rescheduled Endeavour’s launch for April 29.