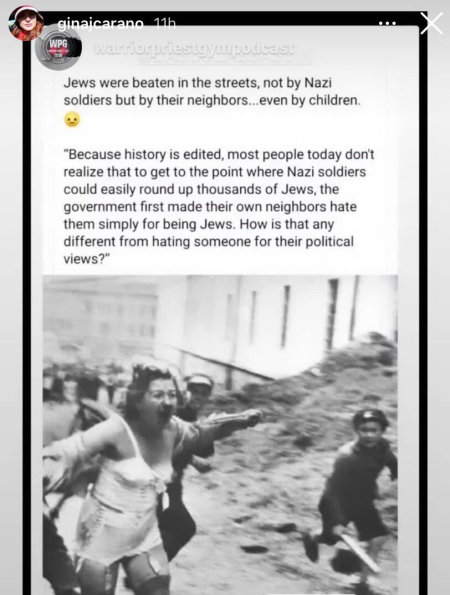 They’re coming for you next: The Disney corporation yesterday fired conservative actress Gina Carano, who was starring in a Star Wars series, simply because she wrote a tweet describing the entirely truthful fact that the Nazis were able to kill the Jews because they had taught the public to hate them and thus agree with that round-up.

Her tweet is to the right. Not surprisingly, a Twitter mob soon formed demanded her blacklisting. How dare she remind people of the evils of oppression, bigotry, and the genocide of a people merely because of their race, religion, or creed? Since she has been an outspoken conservative who supports Trump, her blacklisting by these storm-troopers seemed entirely reasonable to Disney, and so they finally fired here. The statement from the Lucasfilm division of the company indicates the company’s outright ignorance and close-mindedness.

“Gina Carano is not currently employed by Lucasfilm and there are no plans for her to be in the future,” a Lucasfilm spokesperson said in a statement. “Nevertheless, her social media posts denigrating people based on their cultural and religious identities are abhorrent and unacceptable.”

In other words, it is now unacceptable to retell the history of the Holocaust in order to avoid repeating it. In fact, Disney’s action here suggests the left wants another Holocaust, is using Hitler’s tactics quite openly, and thus must do whatever it can — with the help of big corporations like this — to silence and dehumanize anyone who opposes them. And isn’t this exactly what the Nazis did to the Jews, as Carano so nicely illustrated in her tweet?

If Americans don’t fight back hard soon, worse is coming, and soon. Do you subscribe to Disney’s streaming service? Do you rent its movies? Do you watch Star Wars? If after this action you still do, you are then complicit in this blacklisting, and can count yourself as a willing accessory to the coming genocide.