Peace in our time! South Korean intelligence experts have concluded that North Korea now has both the rocket and miniaturized nuclear warhead capable of hitting Russian, China, Japan, and all of South Korea.

“We believe they have accomplished miniaturization of a nuclear warhead to mount it on a Rodong missile,” said the South Korean official, who has knowledge of South Korea’s assessment of the North’s nuclear program. The official spoke to a small group of reporters on condition of anonymity… The Rodong missile can fire a 1 tonne (1,100 lb) warhead a distance of up to 2,000 km (1,250 miles), the official said. That would put all of South Korea, most of Japan and parts of Russia and China in range.

But don’t worry. President Obama has eased tensions worldwide by his speech-making abilities! 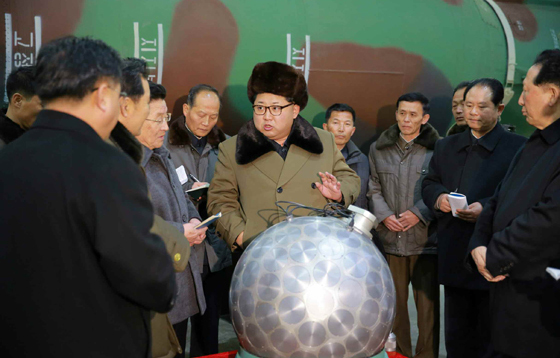 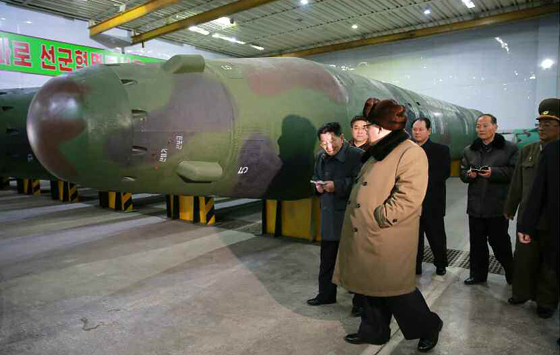 North Korea today revealed plans to place a satellite in non-geosynchronous orbit sometime in the next two weeks.

Pyongyang has said it has a sovereign right to pursue a space programme by launching rockets, although the United States and other governments worry that such launches are missile tests in disguise.

It is horrifyingly hilarious to read the bluster put forth by Obama administration officials about this new North Korean effort to develop ICBMs that, as the article says, “could reach the U.S. West Coast.” Besides wanting to send “a swift, firm message,” they call the North Korean launch announcement a “slap in the face”, “another destabilizing provocation,” and “an egregious violation.” They then say they are working “cooperatively and effectively with the Chinese to counter this threat.”

It is laughable, but terrifying at the same time. North Korea, led by the worst kind of power-mad tyrant, is developing the ability to launch nuclear weapons to any place on Earth, and all our leaders can do is whine how mean they are.

Islamic attack in France
July 17, 2015 at 11:28 am Robert Zimmerman Points of Information

Peace in our time: Even as a jihadist attacked military recruiting offices in Tennessee this week, there was also a major terrorist attack in France, with all evidence pointing at Islamic terrorists as the attackers.

The attack, three separate explosions at a petrochemical plant, has interestingly not been reported in detail by a single mainstream news source in the U.S. I wonder why. Could it be that these events put the lie to President Obama’s Iran deal, that agreeing to this deal will only make our lives more dangerous and will empower the radical and violent Islamic movement, which is as virulent in Iran as it is in the Islamic State?

Nah. It’s all in my imagination. President Obama couldn’t be wrong. He wouldn’t lie to us.

Whose side is Obama on? A media aide for the Iranian President has defected, noting as he did so that in the negotiations the U.S. team has mostly been taking Iran’s side.

In his television interview, Mr Mottaghi also gave succour to western critics of the proposed nuclear deal, which has seen the White House pursue a more conciliatory line with Tehran than some of America’s European allies in the negotiating team, comprising the five permanent members of the UN security council and Germany. “The US negotiating team are mainly there to speak on Iran’s behalf with other members of the 5+1 countries and convince them of a deal,” he said. [emphasis mine]

Words fail me. Either Obama and Kerry are incredibly naive and incompetent, or they have no loyalty to the U.S. and wish to provide aid and comfort to those who wish to destroy us. In either case the citizens of the U.S. and the rest of the world are in serious trouble.

Obama about to make deal with Iran
March 27, 2015 at 4:46 pm Robert Zimmerman Points of Information

Whose side is Obama on? Kerry today informed the Israel government that the U.S. and Iran are close to a deal that Israel calls “incomprehensibly” bad and will do nothing to stop Iran from getting nuclear weapons.

Earlier Friday, an Israeli official told The Times of Israel that the terms of the looming agreement were “incomprehensibly” bad and rejected the Obama administration’s contention that it would keep the regime a year away from accumulating enough fissile material for a bomb.

Estimating that a framework deal would indeed be signed soon, and that a full agreement would follow in June, this official lamented the US-led negotiators’ apparent readiness to remove sanctions without Iran being required to halt its global terrorist activities, and listed a host of areas in which Tehran was working against American, Israeli and moderate Arab interests without being made to pay a price. “The deal is bad because of its readiness to remove sanctions without any American demand from Iran to stop the terror,” the official said. “I estimate that we will have a framework deal soon, and after that a full agreement in June. This is incomprehensible.” [emphasis mine]

The interesting thing here is that both parties in Congress have express loud opposition to this deal and have voted repeatedly to continue sanctions against Iran.

What gives me the willies is this quote:

Meanwhile, Iran, in collaboration with China and North Korea, has stockpiled more than 1,000 ballistic missiles capable of reaching all U.S. bases and oil fields in the region, Israel and several capitals in Europe. Iran currently is working on intercontinental ballistic missiles under the guise of its space program that will soon be capable of reaching any point on the planet. It has produced hundreds of cruise missiles, a clear threat to the flow of oil out of the Persian Gulf, and has armed its vessels with long-range ballistic missiles, with plans to expand its naval mission into the Atlantic Ocean and right behind the Gulf of Mexico.

According to a former intelligence officer of the Revolutionary Guards now defected to a country in Europe, Iran also has several neutron bombs (super-electromagnetic weapons). The source, who attended a commanders’ briefing by the Revolutionary Guards, said they have discussed a strategy in which “many planes will fall from the sky” — a clear indication that Iran is prepared to deliver an electromagnetic pulse (EMP) attack. The International Atomic Energy Agency has verified that Iran has test-launched ballistic missiles off ships in an exercise similar to an EMP attack.

Worse, the leaders of Iran have made it clear they are quite willing — in the name of Allah — to use these weapons to commit wholesale genocide.

Iran is developing techniques and technologies needed to turn weapons-grade uranium into an atomic bomb.
February 27, 2012 at 9:07 pm Robert Zimmerman Points of Information

The day of reckoning looms: “Iran is developing techniques and technologies needed to turn weapons-grade uranium into an atomic bomb.”

All the arguments used against Israel for taking a preemptive strike against a nuclear Iran are wrong.
February 6, 2012 at 2:43 pm Robert Zimmerman Points of Information

All the arguments used to convince Israel not to take a preemptive strike against a nuclear Iran are wrong.

We must also add these words by Iran’s “Supreme Leader of the Islamic Revolution” Ayatollah Khamenei:

The Zionist regime is a real cancerous tumor that should be cut and will be cut.

Like Hitler, who in Mein Kampf told the world exactly how he intended to exterminate the Jews years before he had power, the Iranians have been quite blunt about what they intend to do once they have atomic weapons. This time, we should take them at their word, and stop them before they can do it. And since the U.S. isn’t likely to do it, the Israelis should.

According to a report by state-run CCTV, China had more than 3,000 miles of tunnels — roughly the distance between Boston and San Francisco — including deep underground bases that could withstand multiple nuclear attacks.