The Met Office in the United Kingdom has issued a report on the state of the climate. In it they state unequivocally that the “world is warming”. Unfortunately, the report fails to address the questions that have been raised about much of the existing climate data, following the climategate scandal.

Archeologists have discovered the largest Roman canal ever built at the mouth of the Tiber river.

Closing out debate on climate
August 1, 2010 at 10:35 pm Robert Zimmerman Points of Information

It appears that McCarthyism and the blacklist are both alive and well, thriving happily in the field of climate research. Key quote:

It is disturbing, to say the least, that organisations and persons who would be quick to claim professional status consider that it is their current duty to disparage, or to refuse to debate with, or to muzzle scientists whose views on climate change they apparently disagree with.

Duck! The Sun has unleashed a coronal mass ejection towards the Earth.

Undersea adventure by robots
August 1, 2010 at 9:54 am Robert Zimmerman Points of Information

Undersea adventure by robot. An unmanned probe completed its first dive beneath the Arctic ice this week.

Scientists are beginning to unravel the wind patterns on Titan.

After more than six years, it appears that the Mars rover Spirit has finally died. The rover was originally designed to only operate 90 days.

An evening pause: We’ve had animated machines and actors pretending to be machines. Now, let’s have a Rube Goldberg machine.

Hayabusa on display
July 30, 2010 at 9:22 am Robert Zimmerman Points of Information

Mars Reconnaissance Orbiter takes a picture of the non-face on Mars.

The Mars rover Opportunity has spotted its first dust devil after six-plus years of travel.

Solar sail engineers from around the world gathered in Brooklyn last week for the Second International Symposium on Solar Sailing. Ben Diedrich, fellow caver, solar sail expert, and the man behind wiki.solarsails.info, gave two papers. He also emailed me to say that “Japan’s contingent gave several talks – many of which compared analysis of deployment, flight, or steering with actual flight data” of Ikaros. A review of the program [pdf] revealed some fascinating uses for solar sails. I like this paper title the best: “Deflecting Apophis with a flotilla of solar sails.” [ed. Apophis is an asteroid with the potential of hitting the Earth.]

Update: Japanese scientists have now announced that they have been able to adjust Ikaros’s attitude using sunlight.

Another update: Ben Diedrich emailed me the link to read the actual proceedings from the conference. See pg 103 to read the paper on using solar sails to deflect Apophis.

An experiment flown in space for 10 days by the European Space Agency has found that three species of lichen can survive the hazards of outer space.

End of the world alert! Scientists have identified an almost half mile wide asteroid with a 1 in 1000 chance of hitting the Earth in 2182.

A cave exacavation in East Timor has uncovered the bones of the largest rat species on record, weighing over 13 pounds and living approximately one to two thousand years ago. The dig also uncovered 11 previously unknown rat species.

In its first six weeks of observation, the Kepler mission apparently found almost 150 planets similar in size to the Earth. The results, learned by accident because a talk given by one of the co-investigators was posted on the web, have not yet been officially announced because the project scientists feel a need for additional time to confirm them. Many of these so-called planets might turn out to be false positives, so some caution is in order.

On Saturday (July 24) the American Geophysical Union published a paper in Geophysical Research Letters, entitled “Northern Hemisphere winter snow anomalies: ENSO, NAO and the winter of 2009/10.” This paper attempted to explain the unusually cold 2009-2010 winter, with its record snow falls.

The conclusions of the paper were reasonable, noting that this past winter experienced both an El Nino event in the Pacific as well as a very negative (cold) North Atlantic Oscillation (NAO). To quote the paper’s conclusions: “In winters when an El Nino event and a negative NAO combine, analysis reveal that there are positive snow anomalies across the southern U.S. and northern Europe.”

The authors of the paper made no attempt to explain why these two climate events “combined” this past winter, which in the field of climate change is actually the essential question. What caused it? Moreover, did the deep and extended negative (cold) phase of the Arctic Oscillation (AO) contribute as well, and if so, why did the AO also go negative this winter? And finally, were all these climate events somehow related to the Sun’s unusally long and deep solar minimum?

That they didn’t answer these fundamental questions is not surprising. Climotogists have been struggling with them for decades, and to expect this quickly written paper focused on this one climate event — the cold winter of 2009-2010 — to answer them would be unreasonable. In fact, considering the state of our knowledge, it probably is impossible for any paper to answer these questions at this time.

What makes this particular paper really noteworthy, however, is a quote in its introductory paragraphs:

The wintry winter has encouraged deniers of global warming END_OF_DOCUMENT_TOKEN_TO_BE_REPLACED

It’s not the crime but the cover-up: Michael Mann refuses to answer reasonable questions from a reporter for The Dailer Caller.

As I mentioned previously, last weekend I was in West Virginia exploring and surveying some newly discovered cave passages. These pictures, taken by Nikki Fox, will give you a flavor of what it is like to visit a place never before seen by human eyes. 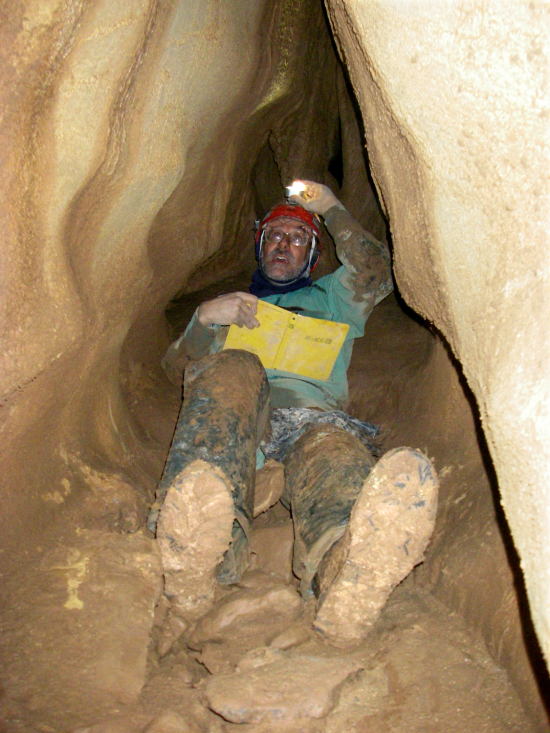 Here I am, trying to sketch the final section of a clean, generally dry flowstone and bedrock passage. Trust me, it isn’t easy drawing a place that your body almost fills.

The lead where this virgin passage began had been known for decades, but had never been entered because END_OF_DOCUMENT_TOKEN_TO_BE_REPLACED

Astronomers have concluded that the high levels of carbon monoxide that they have detected in the upper layers of Neptune’s atmosphere are the leftover fingerprint of a cometary impact some 200 years ago.

An ice-free Arctic in 10 years?

In today’s version of global warming fear-mongering, Senator John Kerry (D-Massachusetts) declared that the Arctic will be ice-free in “five or 10 years.” He apparently based this statement on a 2009 Geophysical Research Letters paper [pdf] that, using computer models, predicted an ice-free Arctic in September could occur as soon as the late 2020s but was more likely in the late 2030s.

Wanna bet? Since that 2009 paper was published, Arctic ice has seen a rebound in ice extent. Moreover, the Arctic oscillation remains in the deepest freeze it has seen in years. And the sun remains quiet, less active than we have seen it since scientists began tracking its behavior from space. Such inactivity means a dimmer sun, which in turn brings with it cold temperatures. Here is the most recent graph (updated on July 20) from the Total Solar Irradiance Time Series produced by Physikalisch- Meteorologisches Observatorium Davos (PMOD) using satellite data since 1978: 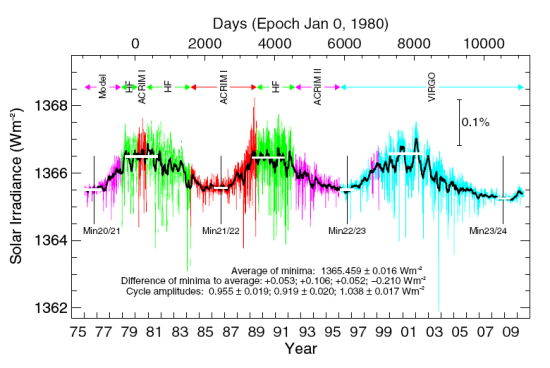 Even though the sun’s total irradiance has shown an up-tick recently as it slowly moves from solar minimum towards solar maximum, if you look closely you will see this up-tick still remains below the lowest points for the previous three solar minimums. And as I have noted here, we appear to be heading for the weakest solar maximum in two centuries.

Of course (as stock brokers say), the past performance of all of these trends is no guarantee of the future performance. Nonetheless, the data indicates clearly the simplistic nature of statements like Kerry’s.

On the subject of caves on the Moon, Paul Spudis has directed me to his very cogent October 2009 post for Air & Space magazine. Here he notes correctly that though lava tube caves on the Moon have value, they are unfortunately apparently not located in the best places for settlement.

Sunset on the Moon

As the sun sets on Bhabha crater on the Moon’s farside, small boulders on the crater’s central peaks become visible in this Lunar Reconnaissance Orbiter image, with inset below. (It is very worthwhile to click on the link above and stroll through the full resolution image.) Scientists believe that the impact which created this crater excavated these boulders from deep within the Moon’s crust, thereby making them valuable tools for determining the geological history of the Moon. Of course, to use these tools requires the geologist to be there, something that might not happen for a while. 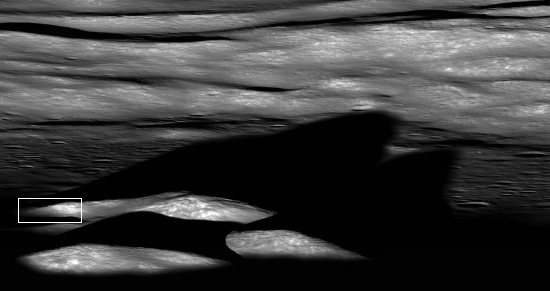 Keith Cowing at NasaWatch notes quickly that the current budget battles over NASA have people in NASA concerned about the future of the James Webb Space Telescope. The telescope has further cost overruns, and should NASA end up operating under a continuing resolution rather than a full budget, there won’t be enough money to keep the project above water.

Impact crater in Egypt
July 23, 2010 at 9:55 am Robert Zimmerman Points of Information

Using Google Earth, a curator at an Italian museum has discovered a previously unknown, very young, and almost pristine impact crater hidden in the deserts of Egypt.

Swallowing a planet
July 23, 2010 at 9:39 am Robert Zimmerman Points of Information

A star with an appetite: Astronomers have used the Chandra X-Ray Observatory to take a closer look at an engimatic star in the constellation Pisces and found that the dust cloud that surrounds it as well as the unusual and enormous jets that shoot from it probably originated when the star evolved, expanded, and swallowed an orbiting companion, either a giant planet or companion star.

Want to poke around on Mars? Since it might be a while before you can actually go there, I suggest you instead make frequent visits to the images page for the HiRise camera on Mars Reconnaissance Orbiter. The pictures that appear here are routinely breath-taking. Below is a cropped image showing the flat top of a mesa in Coprates Chasma. The full image shows detailed layers down the side of the mesa as well as rippled dunes on the mesa top. Everything is remarkably reminescent of something you’d see if you visited the Grand Canyon. Only on Mars, this grand canyon is many times larger and deeper. 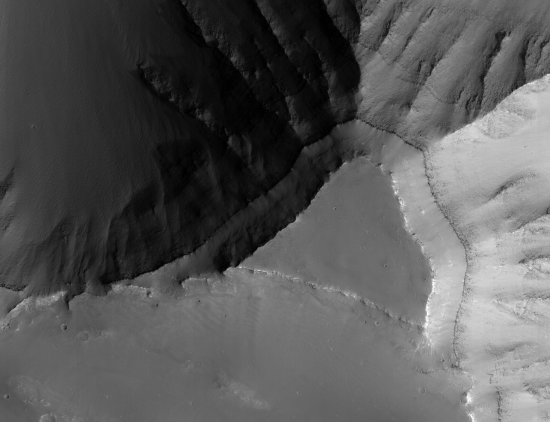 Astronomers have discovered a runaway star flying away from the Milky Way galaxy at about 450 miles per second. What makes this star even more interesting is that its flight path suggests that it was thrown from the very center of our galaxy by the 4 billion solar mass black hole that sits there.