Puzzling red arcs on the Saturn moon Tethys
July 29, 2015 at 10:44 am Robert Zimmerman Points of Information 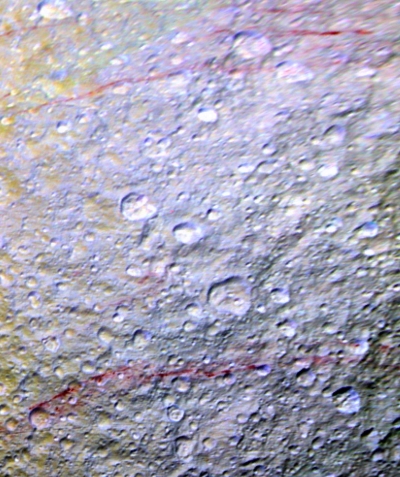 Baffling image time! Images taken in April 2015 by Cassini of the Saturn moon Tethys have produced the best images yet of the puzzling red arcs on the moon’s surface, first identified in 2004.

The origin of the features and their reddish color is a mystery to Cassini scientists. Possibilities being studied include ideas that the reddish material is exposed ice with chemical impurities, or the result of outgassing from inside Tethys. They could also be associated with features like fractures that are below the resolution of the available images.

Except for a few small craters on Saturn’s moon Dione, reddish-tinted features are rare on other moons of Saturn. Many reddish features do occur, however, on the geologically young surface of Jupiter’s moon Europa. “The red arcs must be geologically young because they cut across older features like impact craters, but we don’t know their age in years.” said Paul Helfenstein, a Cassini imaging scientist at Cornell University, Ithaca, New York, who helped plan the observations. “If the stain is only a thin, colored veneer on the icy soil, exposure to the space environment at Tethys’ surface might erase them on relatively short time scales.”

I could also file this under “the uncertainty of science”, as the scientists at this point haven’t the slightest idea what created these arcs.