Rover update: Curiosity on the shore of a sand sea

Curiosity stops on the shore of a sand sea, while Yutu-2 continues its journey west away from Chang’e-2. On the way: Perseverance and China’s first Mars rover on Tianwen-1. 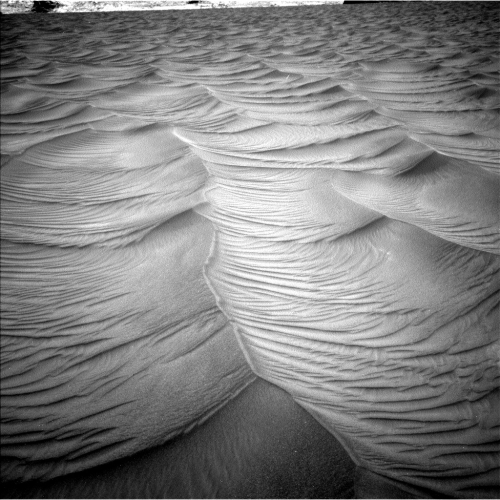 The photo on the right, taken in late December, shows the large sand lake the science team has labeled “the Sands of Forvie” that the rover has been working its way uphill to reach since it left the Mary Anning drill site back in November.

Since they arrived there, they have used the rover to roll across the sand, cutting into a ripple to expose its interior, followed by high resolution close-up images. They have also used the rover to analyze the chemical composition of the sand’s grains, from that interior section, from the top of several ripples, and from the troughs in between.

Once finished here, the rover will be turned east again to continue its journey around this sand sea to the very base of Mount Sharp. The overview map below shows the planned route. 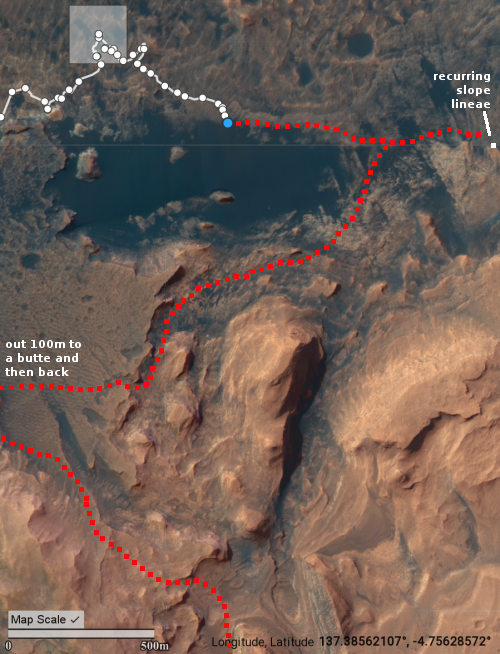 Click to go to the “Where is Curiosity?” site.

The map to the right comes from the recently and very nicely revamped “Where is Curiosity?” site maintained by the Curiosity science team.

The blue spot indicates Curiosity’s present location. I have also added some annotations to this map. The red dotted line marks Curiosity’s future planned route. The white dot is one of two recurring slope lineae that Curiosity will look at from a distance. Both are examples of streaks on a cliff that change seasonally and might signal the seepage of water brine down a cliff.

As the red line shows, once Curiosity gets around this sand sea it will be moving into very dramatic terrain. It will also be finally beginning the actual climb of Mount Sharp. Up until now they have been working though the mountains small foothills. The second map below, giving an oblique view, provides some perspective. 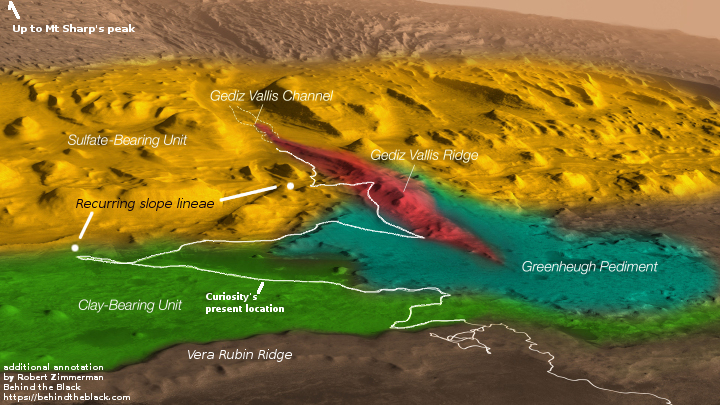 It will still likely be many months before this happens. The science team will want to spend some time observing the lineae to see if it changes. Moreover, they will certainly do a number of stops along the way, especially when they finally make contact with the yellow sulfate-bearing unit above them.

Nonetheless, when Curiosity enters the Gediz Valles Channel the scenery will start to get truly spectacular, as that channel resembles in many ways the slot canyons of the American southwest. To get an idea of what we will see, read my August 24, 2019 post on Curiosity’s future travels.

The Chinese rover continues to chug away, having been traveling now for two years on the lunar surface. Its original minimum mission was set at ninety days, so right now these Chinese engineers have an achievement comparable to the American engineers who designed the Spirit and Opportunity Mars rovers, both of which were slated to work only ninety days but ended up working years.

At present Yutu-2 is continuing its westerly journey away from the lander Chang’e-2, and is about to wake for its 26th lunar day on the far side of the Moon. During that time it has traveled just under 2,000 feet, inspecting a number of small craters along the way. For a close-up look at that track check out the images taken from orbit of Yutu-2 by Lunar Reconnaissance Orbiter (LRO).

According to the rover’s science team, up to now the rover has been moving through an ejector field from a much larger impact to the north. Their goal is to exit this field and reach a region of basalt about a mile to the northwest. Based on the distance the rover travels each lunar day (which they have increased recently), it will likely about another year or so to get there.

Two rovers are scheduled to land on Mars in ’21. The Chinese rover, presently unnamed and being carried by China’s Tianwen-1 Mars orbiter, will arrive in Mars orbit on February 10th, spend several months doing reconnaissance of the rover’s landing site in the northern lowland plains of Utopia Planitia, before releasing it in May.

The American rover, Perseverance, will land on Mars on February 18th. It is basically an upgraded Curiosity. Once on the ground on the floor of Jezero Crater it will work its way west towards the giant delta of mudlike material that sometime in the past flowed out of a gap in the crater’s rim, as shown in the image on the right..

Like Curiosity, once it gets into that delta the views will be magnificent. How long it takes to get there will depend on how close they land to it in February.