Today the science team of Curiosity issued a press release outlining their travel plans for the rover over the next year. In conjunction, they also released a mosaic of 116 images taken by the rover showing that route, a reduced in resolution version shown above.

The rover’s next stop is a part of the mountain called the “sulfate-bearing unit.” Sulfates, like gypsum and Epsom salts, usually form around water as it evaporates, and they are yet another clue to how the climate and prospects for life changed nearly 3 billion years ago.

But between the rover and those sulfates lies a vast patch of sand that Curiosity must drive around to avoid getting stuck. Hence the mile-long road trip: Rover planners, who are commanding Curiosity from home rather than their offices at NASA’s Jet Propulsion Laboratory in Southern California, expect to reach the area in early fall, although the science team could decide to stop along the way to drill a sample or study any surprises they come across. 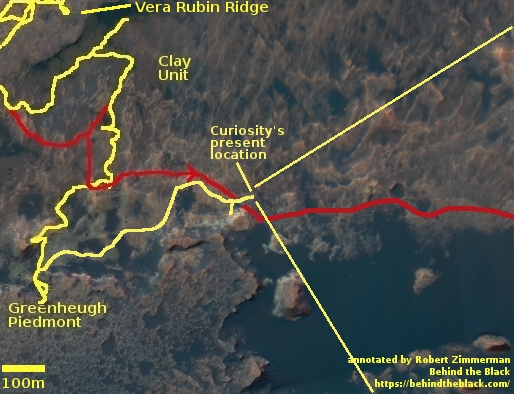 This journey actually began in late May, at about the time of my last rover update. The overview map to the right shows in red their approximate planned route to avoid that large dune field to the south. The meandering yellow line indicates Curiosity’s actual route. The straight yellow lines indicates I think the area covered by the mosaic above. As you can see, since the end of May they have quickly returned to their planned route. Note also that the dune field extends about twice the distance beyond the eastern edge of this overview map.

The next big goal when they reach that sulfate-bearing unit will be to not only study it but to also study a recurring slope lineae on the slopes of that unit, a streak that darkens and lightens seasonally that might be caused by seeping brine from below. Because the sulfate unit and the linneae are both major geological goals, they are going to be moving fast to get there. I am sure they will periodically stop to do geology, but I think the travel will be, as it has been for the past month, quick-paced.

Once the rover gets to the sulfate unit, Curiosity will at last have actually reached the base of Mount Sharp. Up until now it has been traveling first in the surrounding plains, then in the mountain’s foothills. The terrain will get much rougher and be far more spectacular, as Curiosity will be entering canyons as it begins to climb the mountain itself.