Cool image time! In perusing the April image release from the high resolution camera of Mars Reconnaissance Orbiter (MRO), I came across the image above, cropped and reduced to post here, of the discovery of another landslide within Hydraotes Chaos, one of the largest regions of chaos terrain on Mars. The image above was taken on February 9, 2019, and has since been followed up with a second image to create a stereo pair.

This is not the first landslide found in Hydraotes Chaos. I highlighted a similar slide on March 11. Both today’s landslide as well as the previous one likely represent examples of gravitational collapses as shown in this science paper about Martian ground water. Some scientists have proposed that Hydraotes Chaos was once an inland sea, and as the water drained away the loss of its buoyancy is thought to cause this kind of landslide at the base of cliffs and crater rims.

The past presence of water also helps explain the soft muddy look of this landslide. When this collapse occurred the material was likely saturated with water. Today it is most likely quite dry and hardened, but when it flowed it flowed like wet mud. Its size, almost a mile long and a quarter mile across, speaks to Mars’s low gravity, which would allow for large singular collapses like this.

Hydraotes Chaos itself is probably one of the more spectacular places on Mars. It sits at the outlet to Marineris Valles, shown in the image below. This gigantic canyon, which would easily cover the entire U.S. if placed on Earth, was the largest drainage from the large volcanic Tharsis Bulge to the west, where Mars’s largest volcanoes are located. 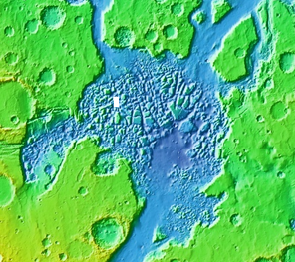 The small white rectangle inside the larger box is the location of the above image. The large box indicates the area covered in the close-up overview of Hydraotes Chaos below.

This is a land of giant mesas and endlessly mazelike cross-cutting canyons. When catastrophic floods were crashing down through Marineris Valles into this region, it cut open these canyons and created an inland sea here which over a relatively short time (several thousand years) evaporated and sublimated away. While the sea existed it furthered the erosion in these cross-cutting canyons, which was then accelerated by the quick disappearance of the water. These landslides add weight to this theorized history.

The result of this geological history is a complex and amazing terrain that might very well become either a major tourist attraction or population center once Mars is fully colonized. While not the wettest place on Mars, data from several orbiting spacecraft has indicated that Hydraotes Chaos still has plentiful water locked below the surface.

Imagine building a home amidst these canyons or on top of the mesas. The highest walls defining Hydraotes rise anywhere from one to two miles, matching and exceeding the walls of the Grand Canyon in height. Within the maze the mesas themselves rise several thousand feet, forming pinnacles and slot canyons of all types.

The canyon walls themselves might have mining value as the erosion could have easily exposed minerals and water sources of great value to future Martian settlers.

This will be a place that will attract Martians of all types, for pleasure, play, and profit. I just wish I could join them in that adventure.