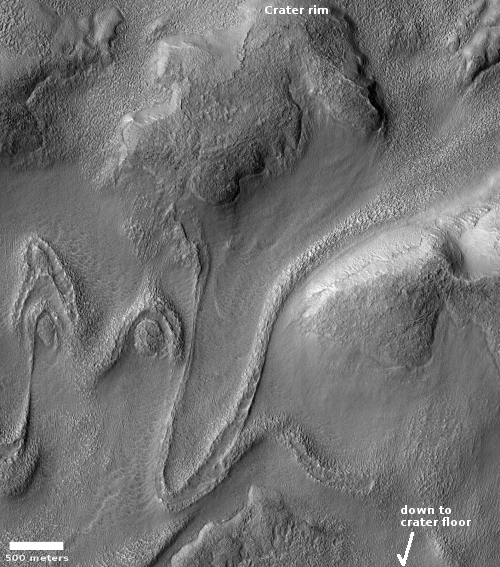 Cool image time! The photo on the right, rotated, cropped, reduced, and annotated to post here, was taken by the high resolution camera on Mars Reconnaissance Orbiter on October 6, 2020. It shows the northern interior rim of 42-mile-wide Greg Crater in the southern cratered highlands of Mars.

What makes it interesting is the curving ridge that appears to drape itself around several larger hilltops. That ridge is a moraine, the debris or glacial till that accumulates at the foot of glaciers as push their way down hill. As the glacier had flowed those hills became obstacles, so that the glacier (and its moraine) were forced to go around.

The overview map and wider view from the context camera on MRO below give the setting. 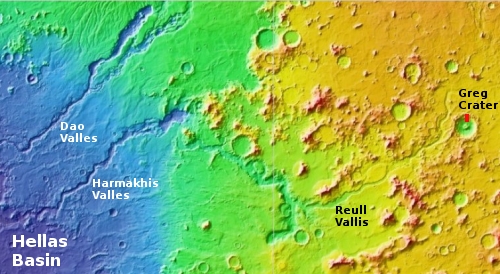 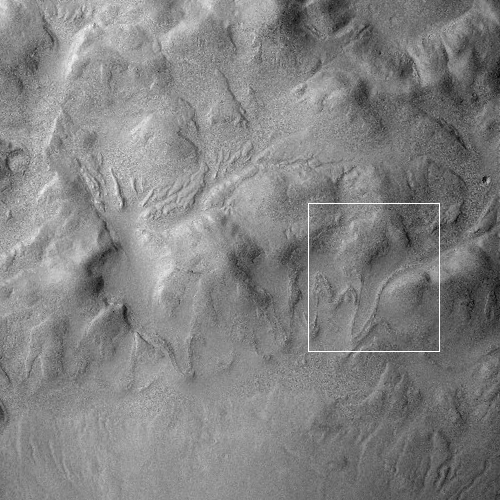 The red rectangle in Greg Crater is the location of this cool image. As you can see, it is located near the headwaters of Reull Vallis, a canyon that flows down into Hellas Basin and one in which I have posted a number of images, all showing evidence of glacial features (see here, here, here, and here). In this sense, this mid-latitude region in the southern hemisphere resembles the glacier country I have highlighted frequently in the
northern hemisphere’s mid-latitude chaotic terrain. Practically every high resolution picture you look at in this region shows evidence of glacial features.

The second MRO image to the right, taken by its context camera and rotated, cropped and reduced to post here, shows that the moraine and glacier in the top photo is not unique, but similar features are seen throughout this crater.

These glacial features tell us several important facts about this particular region on Mars. First the glacier that pushed this moraine now looks reduced, so that the ridge stands higher than the glacier that created it. This means that these glaciers are not only inactive, they appear to be in the process of sublimating away.

Second, a close look reveals that the moraine itself is multi-ridged, suggesting that the glacier had had multiple bursts of growth, leaving behind different ridges at its foot each time.

Both facts suggest a cyclical climate situation, where these glaciers wax and wan at different times. Scientists have noted this already, and for this reason theorize that the coming and going of these glaciers is tied to the changes in the red planet’s obliquity, its rotational tilt to the Sun. As I noted at this May 4, 2020 article about the edge of the north polar icecap,

Right now the obliquity is similar to Earth’s, 25 degrees, so the poles and glaciers are generally in steady-state

At this location it appears that the glacier might not be in a steady state but actually decaying. Scientists have used MRO to take multiple images of this location since its arrival in Mars orbit in 2006, but I do not have the tools to detect any changes.

Why this region does not produce chaotic terrain like in the north is its own mystery. It could be the higher elevation and steeper grade down into Hellas Basin. Or not. Without observations on the ground it is impossible to answer this question satisfactorily.