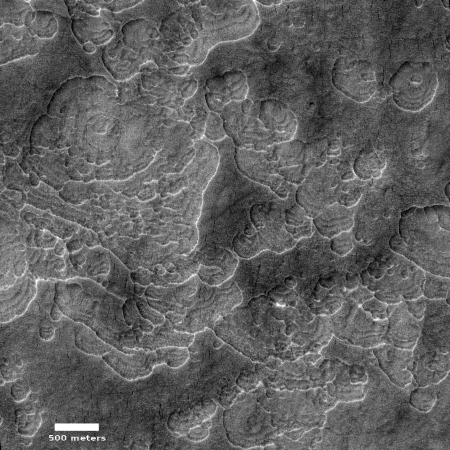 It’s a slow news week, with the too much partying. (To my gentle reader: For some reason I have been losing a day during this whole week, always thinking that Christmas was on Thursday and that today was Friday. Thus my error in thinking the Long March 5 flight was today. It is tomorrow morning. Forgive me for my absent-mindedness.) So let’s look at a cool image!

The photo on the right, cropped and reduced to post here, was taken my the high resolution camera on Mars Reconnaissance Orbiter (MRO) on October 8, 2019. Entitled “Scalloped Depressions in Utopia Planitia,” it shows a strangely eroded surface in the northern lowlands of Mars, where an intermittent ocean might have once existed.

The location of these scallops is shown to the right.

I have taken the same overview map used from two recent cool image posts, showing how these scallops relate in location to the strange crater in Utopia Planitia as well as the glacial-surrounded mesa in Protonilus Mensae.

In caves, scallops like this form from water or wind flow, but when they do, they are all oriented the same way. Here the scallops are at different orientations, terracing down from the center of the image. In this case it appears that scientists believe [pdf] the formation process is related to the sublimation of underground ice at this location.

According to [one hypothesis] scallop formation should be ongoing at the present time. Sublimation of interstitial ice could induce a collapse of material, initially as a small pit, then growing southward because of greater solar heating on the southern side. Nearby scallops would coalesce together as can be seen to have occurred.

What is most cool is that the geologists think the process that forms these scallops is related to the same processes that cause the formation of the swiss cheese landforms in the south polar regions.