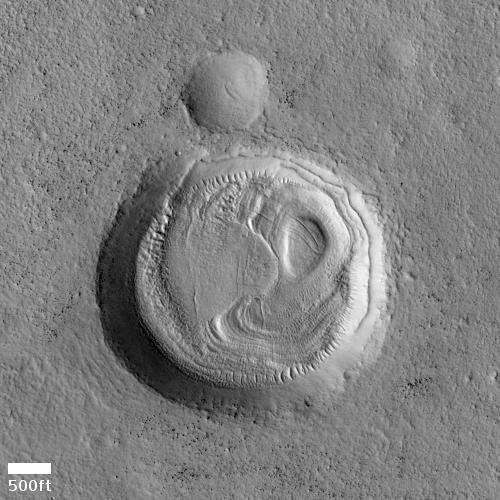 Cool image time! The photo to the right, cropped to post here, was taken by the high resolution camera on Mars Reconnaissance Orbiter on March 6, 2021, and shows a mid-latitude crater in the northern lowland plains of Mars with what appear to be layered glacial features filling its interior.

The theory that scientists presently favor for explaining many of the features we see on Mars is based on many climate cycles caused by the wide swings the planet routinely experiences in its obliquity, or rotational tilt. When that tilt is high, more than 45 degrees, the mid-latitudes are colder than the poles, and water ice sublimates southward to those mid-latitudes to fall as snow and cause active glaciers to form. When that obliquity is low, less than 20 degrees, the mid-latitudes are warmer than the poles and that ice then migrates back north.

Such cycles, which are believed to have occurred many thousands of times in the last few million years, will place many layers on the ground in both the mid-latitudes and at the poles. The layers in this crater hint at this.

The overview map below gives some further context. 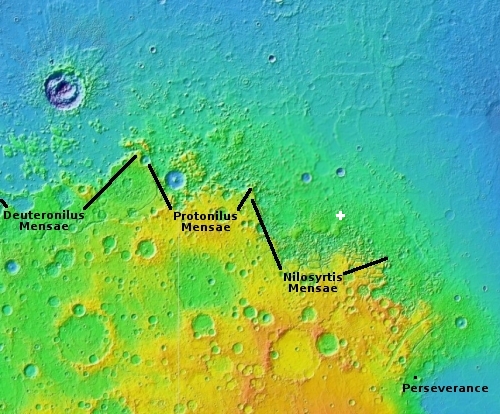 The white cross marks the location of this crater. It sits inside the mensae region on Mars that I label glacier country because MRO has so far detected evidence of so many glaciers there. Practically any MRO photo you look at in this part of Mars will have in it some features that resemble ice glaciers in some manner or another.

The global map below gives a wider context, both of where this region is on Mars, as well as the present and future exploration by landers and rovers. The white hatched lines at 30 degrees latitude north and south mark the limit of so far detected near-surface ice.. The white enclosed regions are where many many glacial features dominate.

Where would you go? I personally now want to arrive in my own personal helicopter, and fly about until I find a spot that not only has easily accessible water but countryside that is both spectacular and of value. The region north of Perseverance’s landing site is close to 30 degrees latitude, has lots of breath-taking terrain as well as a lot of potential minerals. I might go there first, but there is also this very intriguing pit in Tempe Terra just north of the Kasei Valley that attracts me as well.