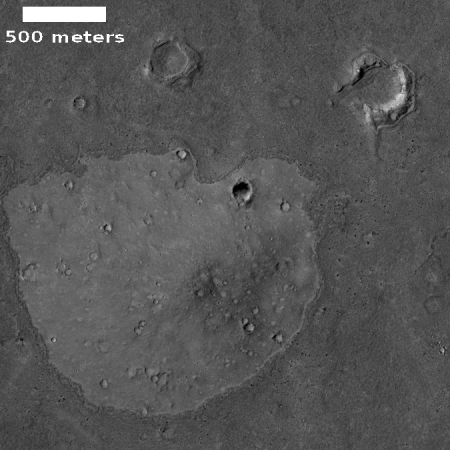 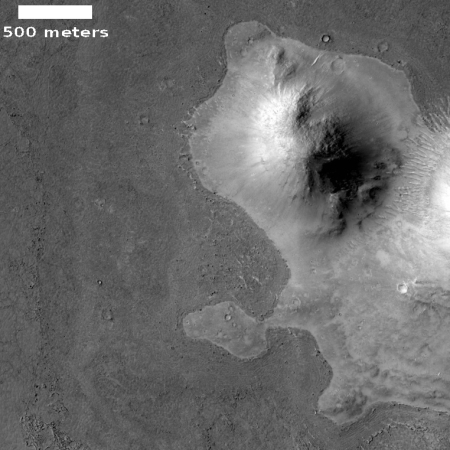 The two images to the right, reduced and cropped to post here, are sections taken from an uncaptioned picture, titled “Lava-Draped Surface in Cerberus Palus” and found in the most recent download from the high resolution camera on Mars Reconnaissance Orbiter (MRO).

It is obvious why the MRO scientists gave this image this title. The hills in both pictures clearly seem to stand up like islands in a surrounding sea of frozen lava. Older craters, created prior to the lava flow, are partly obscured by the lava flows, their interior floors filled and their rims broken as the lava flooded this region.

Nor are these the only high points captured in the image that this flood of lava inundated. If you look at the full image there is even a low mound where it appears the surrounding lava flood worked its way up the hill’s gently sloping flanks only to freeze just before it completely covered the top of the mound.

The location of this image, shown by the red box in the overview map below and to the right, gives us a hint where the lava came from, though the distances involved to the nearest giant volcano, Elysium Mons, are so large it is likely that this flow is not directly linked to that volcano.

The image itself is inside a region called Cereberus Palus, the biggest and most extensive sections of the transition zone between Mars’s southern highlands and the northern lowlands. The black box is the location of an earlier lava-related “cool image” post on Behind the Black from June 10, 2019. As with today’s image, it showed that the geology that formed this region was strongly dominated by volcanism and the flow of lava.

Because of the general lack of high resolution images in this area, it is presently difficult for scientists to understand completely the history of this volcanic activity. The nearest other hi-res image to the west appears to show the margin of this lava flow, but its source does not yet appear to be pinned down.

Regardless, it appears the lava flow was large and extensive. Understanding its genesis and history will do a lot to help scientists better understand the overall geology of Cerberus Pallus and this part of that transition zone.