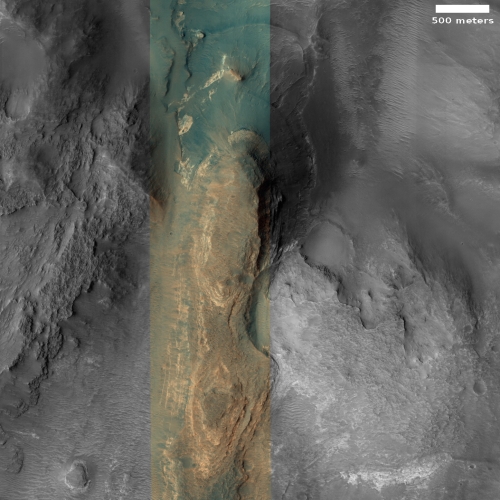 Cool image time! The photo to the right, rotated, cropped, and reduced to post here, was taken on June 24, 2020 by the high resolution camera on Mars Reconnaissance Orbiter (MRO). It shows a distinctive mesa in a mountainous region in the cratered highlands of Mars, just north of Hellas Basin, the deepest basin on the red planet.

On Earth the assumption would be that these terraced layers imply different sedimentary layers that erode at different rates, as best illustrated by the Grand Canyon in Arizona. On Mars that assumption is not unreasonable, but unlike Earth, those layers could not have been formed in connection with large ocean bodies creating seafloor layers from the deposit of sealife over centuries. Some other geological process over time formed them, with volcanism, either from volcanoes or impact, being the most likely. 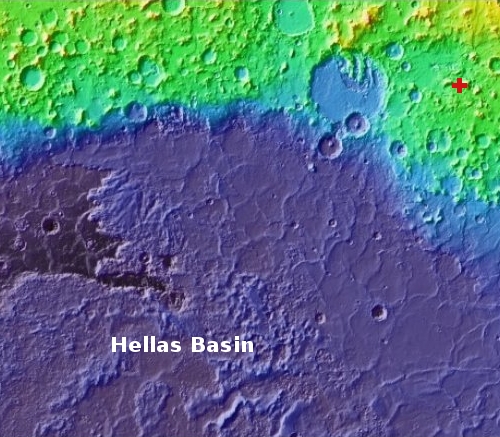 The mesa’s location is indicated by the red cross on the overview map to the right. At 27 degrees south latitude, it is likely too close to the equator to show much glacial evidence, though this is not impossible. A close look at the full image however implies mostly dust, dunes, and bedrock, not glaciers.

Why there are so many exposed layered and terraced features in and surrounding Hellas probably speaks to its origin and later erosion. Hellas is believed the result of a single very large impact, suggesting the layered terrain within it is likely from impact melt. Layers on its perimeter, such as today’s image, could instead be layers deposited by either volcanic lava flows or eruptive ash deposits, only now being exposed during subsequent eons of erosion.

The color strip suggests that much of this terrain is coarse sand or bedrock, with a lot of dust and sand everywhere, especially at lower elevations.

While the full geological picture here remains unexplained, I find the mesa impressive, and remarkably reminiscent of the mesas scattered through the Grand Canyon. It just formed in a different way.