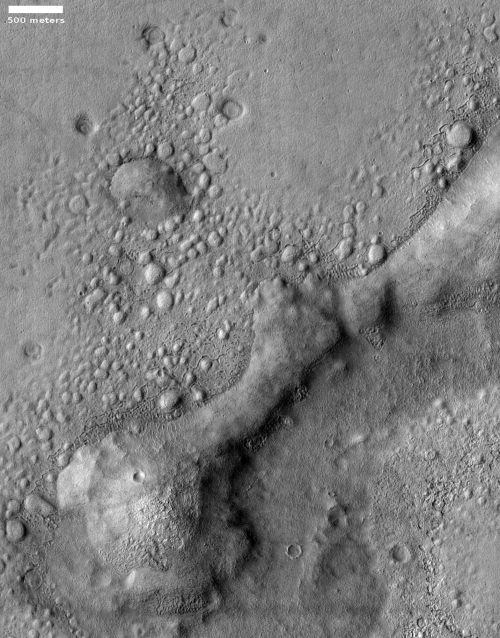 Cool image time! The photo to the right, rotated, cropped, and reduced to post here, shows what the scientists from the high resolution camera on Mars Reconnaissance Orbiter (MRO) label “fretted terrain.” In an earlier post describing evidence found by Europe’s Mars Express orbiter of glaciers in the northern mid-latitudes of Mars, fretted terrain was described as follows:

As is common with fretted terrain, it contains a mix of cliffs, canyons, scarps, steep-sided and flat-topped mounds (mesa), furrows, fractured ridges and more, a selection of which can be seen dotted across the frame.

These features were created as flowing material dissected the area, cutting through the existing landscape and carving out a web of winding channels. In the case of Deuteronilus Mensae, flowing ice is the most likely culprit. Scientists believe that this terrain has experienced extensive past glacial activity across numerous martian epochs.

In that case the fretted terrain was in the transition zone between the northern lowland plains and the southern cratered highlands, and actually resembled chaos terrain. What we see here looks far different, a surface that resembles the bubbly surface of a vat of thick molten stew.

This image is also deep in the cratered southern highlands, though still in the mid-latitudes at 41 degrees south latitude. While the presence of ice close to the surface is possible at this latitude and could definitely explain what this image shows, it would be a big mistake to accept this explanation without skepticism. A lot is going on here, and much of it suggests volcanic-type processes. The volcanoes might have been spewing mud or ice instead of molten lava, but then again, all is uncertain.

What is certain is that I can’t help thinking of the pock-marked skin of an adolescent teenager when I look at this photo. And for all we know, the processes that produce both surfaces could be in many ways similar.