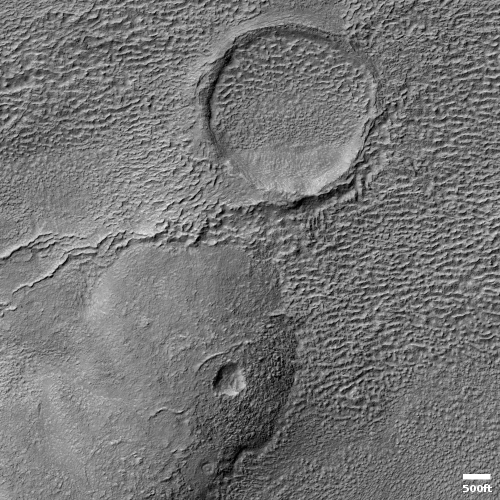 Cool image time! The photo to the right, cropped and reduced to post here, was taken on March 7, 2021 by the high resolution camera on Mars Reconnaissance Orbiter (MRO) and was simply labeled “Pit on Top of Dome in Promethei Terra.”

The cropped section to the right shows one of two such pits visible on the entire image. Promethei Terra is a large 2,000 mile long cratered region due east from Hellas Basin, the deepest large region on Mars.

What caused these pits? The known facts provide clues, but do not really solve the mystery.

First, this image is located in the southern cratered highlands at 45 degrees south latitude. Thus, it is not surprising that it resembles similar terrain in the northern lowlands that suggests an ice layer very close to the surface.

Second, the stippled terrain to the east of the dome is reminiscent of brain terrain, an as-yet unexplained geological feature seen in the latitudes above 30 degrees both north and south that is associated with areas where glacial features are found.

Third, the crater in the image resembles similar craters found in the northern lowlands that appear filled with ice. That this filling seems to favor the crater’s northern interior, which will be more shadowed most of the year, lends weight to this hypothesis.

Finally, this image is located about 175 miles southeast of Reull Valles, a canyon feeding into Hellas Basin where many glacial features are found. It is also not far north of the same region where many ice scarps have been identified, cliff faces with visible underground ice layers exposed.

So, there is likely ice under the ground here and possibly close to the surface, which suggests the pit and dome might possibly be an ice volcano.

Yet, maybe not. Why should there be an ice volcano here and not elsewhere? What causes the ice to be forced upward? Most of the time in these Martian glacial regions the ice instead flows downward, following the grade, like water and ice usually do.

Then there is the faint circular feature to the southwest of the pit that is also about the same size. This suggests an impact crater that has been most filled or eroded over time. Maybe the dome is made up of some pedestal craters, now covered with ice. Under this scenario, the impacts occurred, then over time the surrounding terrain eroded away leaving the hardened impact craters as pedestals. Then a large amount of ice was deposited on top, hiding the older craters entirely. Now that ice is sublimating away slowly, and the pit is a sink located over the center of one of those hidden pedestal craters.

Sounds good? Well, I gotta million of ’em! And all my theories are worth about as much as the electrons they are written on. More data is needed, including some in situ observations and even some core samples. Only then will we be able to form truly reliable theories as to what happened here.