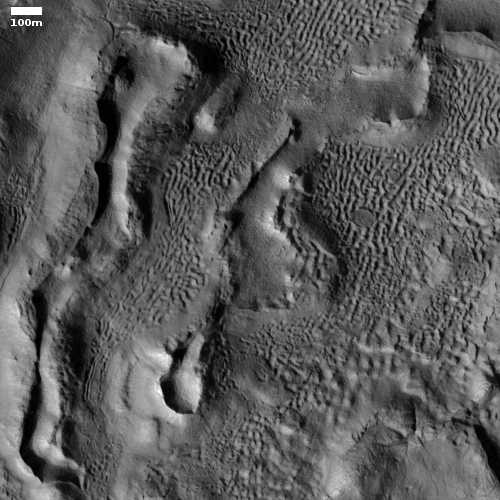 Today’s very cool image is cool because of how inexplicable it is. To the right, cropped to post here, is a photo taken by the high resolution camera on Mars Reconnaissance Orbiter (MRO) of an area of what they call “Ribbed Terrain and Brain Terrain”.

I call it baffling.

Nor am I alone. At the moment the processes that create brain terrain (the undulations between the ridges) remain a complete mystery. There are theories, all relating to ice sublimating into gas, but none really explains the overall look of this terrain.

Making this geology even more baffling are the larger ridges surrounding the brain terrain, all of which appear to have depressions along their crests. Here too some form of sublimation process appears involved, but the details remain somewhat mysterious. 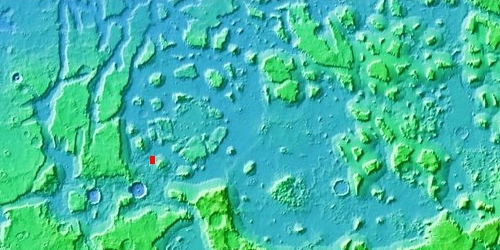 This image, as indicated by the red box in the overview map to the left, is located in the northern mid-latitudes, in a region of chaos terrain dubbed Deuteronilus Mensae that also sits in the transition zone between the northern lowland plains and the southern cratered highlands. The random mesas, buttes, and canyons of chaos terrain is evident.

Here in this transition zone planetary scientists have found lots of evidence of buried glaciers and ice, all near the surface. (See also these recent cool images — here and here — that add weight to this conclusion.)

Here also planetary scientists have consistently found some of the strangest Martian terrain. It appears the geology here is providing us a reminder of the true alienness of Mars, warning us that many other features on the red planet that seem familiar might in truth be very deceiving, and that their origins might not be what we assume. Over eons the ebb and flow of Mars’ water ice to and from its poles and its mid-latitudes has caused major geological reshaping of the surface, in ways that simply do not occur on Earth.

It is going to take a lot of research over decades to untangle this alien Martian geology.l. We have only just begun.