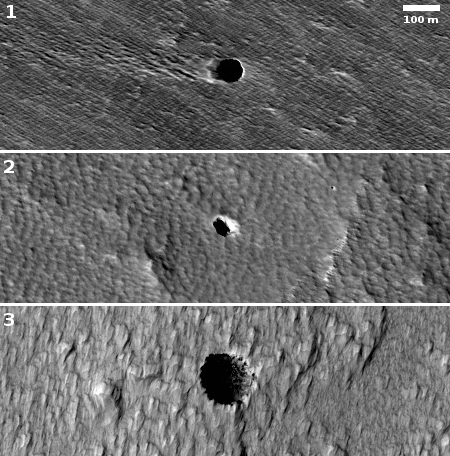 As I said in my last post in February showing recent pit discoveries on Mars, I could almost make this a monthly series. In the March image download from the high resolution camera of Mars Reconnaissance Orbiter (MRO) were three (maybe four) more pits, all likely skylights above lava tubes and all located near the giant volcano Arsia Mons in the region dubbed the Tharsis Bulge. The image to the right shows all three, with a possible fourth just northwest of pit #2 and visible in its full image. For the full images of the other two pits go here (#1) and here (#3). In all three cases, click on the “black & white map projected” link to see the full image with scale. 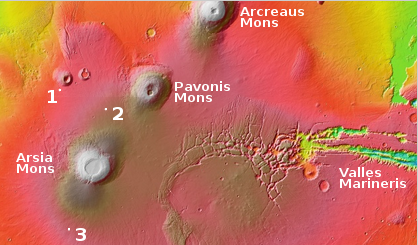 The overview map on right shows where these three pits are located. If you compare this map with my previous overview maps from November 12, 2018 and February 22, 2019 you can see that while these pits are all found on the volcanic slopes surrounding Arsia Mons, they are all different pits. Moreover, the ten pits listed in these three posts are only a small sampling of the more than hundred already found.

Whether these pits are deadend sinks or skylights into underground lava tubes that connect is at this point unknown. It would be a reasonable speculation to assume that some are deadends, and some link to extensive tubes of varying lengths. It would also be dangerous. Mars is alien. While the geology will be based on the same physical laws found on Earth, the lighter gravity is going to produce things differently.

The three images above however do show some intriguing details.

In the first there appears to be a windblown pattern going from the pit to the west. This is generally in the downhill direction, so maybe we are looking at a lava flow pattern?

The second pit, located between Arsia and Pavonis Mons, is the smallest, but it also has a second pit nearby, to the northwest in the downhill direction. The alignment of the grade and location of these two pits suggest they are linked by an underground tube. If you look at the full image you will see that all the surface features follow this same alignment. The image resolution however is not good enough to show whether there are any passages leading off below the rims.

The third pit too has features linking it to the downhill grade. In this case the grade goes from the northeast to the southwest. In the full image the pit sits on the northwest edge of a shallow canyon flowing to the southwest. It almost appears to have been a resurgence point into that canyon.

Or not. The manner in which lava flowed once on Mars remains an on-going scientific question, one that pertains directly to explaining many of the geological features we see today. And since we can only see most of these features from a great distance, our knowledge base for answering this question remains somewhat limited.

All of these pits however remain important targets for future exploration, as there is evidence that water ice might still be found within them, and building a colony underground has many many advantages, even if there is no water therein. Here however there might very well be water too.