The Bill of Rights, canceled in New Jersey
these past two years.

A profile in courage: The owners of a New Jersey gym, Atilis Gym, who refused to comply with any of the absurd Wuhan flu restrictions imposed by Democratic Party Governor Phil Murphy and his health department have had their business license restored after two years, during which they managed to keep the gym functioning by asking for donations by those who used it.

[Ian] Smith claimed that as a result of not complying with lockdown orders, he and [Frank] Trumbetti received more than 90 citations, along with ten gym members who received citations; 9 criminal charges; that both he and Trumbetti were arrested, as well as one member; that local police changed the locks on the building, backed up their plumbing, and eventually boarded up the gym; that they were fined $15,497.76 every day they remained open, for 5 months; that $173,000 in fundraising for their legal defense was seized by the state; and that they owe more than $300,000 in legal bills. “And they took our business license,” Smith wrote. “Our ability to pursue the American dream. All for what? We were right all along. To date, 391,683 visits to our facility and people got healthier, happier, and better.”

“Well, it paid off,” Smith continued. “The township folded. They reinstated our business license. It took them 2 years to realize that nothing would make us kneel. … We made it. 2 years without charging a single member – just donations and [T-Shirt] sales. All the legal bills, fines, normal overhead, and safety equipment. We were able to do it because of you all. Thank you all again.”

Expect these owners to follow up with lawsuits to recover damages for the state’s illegal acts to try to destroy them.

Their resistance to tyranny was very painful for these brave men, but their courage cannot be applauded enough. They did what more Americans should have done, and did not. They stood up to the idiotic health orders of the state, that were based on no science at all and were completely useless:

On July 20, [2020] Superior Court Judge Robert Lougy in Camden ruled that Atilis must comply completely with an executive order by Murphy that limits indoor gym use to individual training sessions in separate rooms and bars unrestricted public use. The owners refused, and on Friday, the judge held the gym in contempt of court and said the state could shut it down. [emphasis mine]

Murphy’s edict was not only completely against logic, it was against proper healthcare. Working out at a gym is probably the best way to strengthen your immune system and thus better protect you from an illness like the Wuhan flu. And doing so with others in an open space is certainly not going to increase your chances of catching the virus.

Moreover, two years later it is now quite clear that these lockdown measures did nothing to slow the spread of COVID or reduce its mortality. At a minimum they only served to devastate the lives of millions, for no reason.

To put it bluntly, all that petty dictator Murphy was really doing was flexing his muscles, arbitrarily making it illegal for some businesses, such as gyms, to function. And he did it based on no law, in utter violation of the Constitution.

Smith and Trumbetti refused to bow, and with the help of their customers and many others across the nation, were able to withstand the onslaught of the government goons. 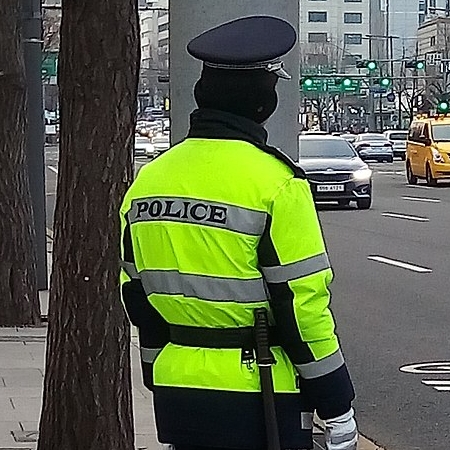 He might be wearing blue or green, but he is today’s
jackbooted brownshirt

Meanwhile, the behavior of the police, who obeyed these unlawful orders, must be recognized. Every policeman takes an oath to uphold the law. The policemen who arrested these men and shuttered their gym, broke that oath. They followed orders instead. For the past two years, states like New Jersey were no longer ruled by law, but by men, issuing edicts arbitrarily and enforced solely by the might these policemen gave them.

More than anything, we should be ashamed with the police who enforced Murphy’s edicts. My opinion of the men and women who wear these uniforms has plummeted. When I see them now, I see an enemy of freedom, not a protector of it. Thus the police should not be surprised that they are now increasingly treated badly. They deserve it, based on their support of illegality in the past two years.