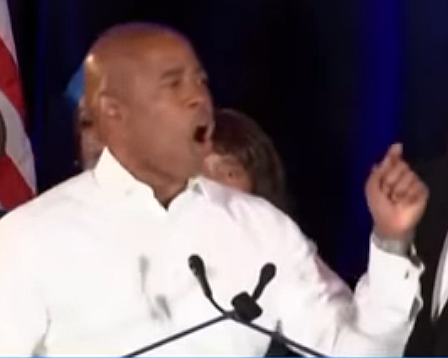 Bring a gun to a knife fight: In the past week three stories from New York City suggest that the willingness to fight against the irrational and abusive COVID shot mandates imposed by the one-party rule of the Democratic Party in that city can win.

First, a state judge in New York on September 13, 2022 ruled in favor of a lawsuit by police officer Alexander Delito, stating that the city cannot fire him for refusing to get the jab. Delito had apparently been arbitrarily denied a religious exemption, with no explanation. As the judge noted in his decision:

“The hollow and generic phrase ‘does not meet criteria’ cannot be rational because not a single item particular to [Deletto] was discussed and not a single reason for the decision was given,” Justice Arlene Bluth ruled. “There is no indication that anybody even read [Deletto’s] arguments. It is the duty of the agency to explain why it made the decision,” the judge added.

The ruling sets a precedent that will make it difficult for New York City to continue the mandate. Not surprisingly, a week later the city’s Democrat mayor, Eric Adams, announced he is lifting the mandate on the private sector and on school children, even as he refused to remove it from government workers.

The response from the leaders of various government unions was immediate. Here is just one example:

Patrolmen’s Benevolent Association President Pat Lynch was among those quick to criticize the city. “This announcement is more proof that the vaccine mandate for New York City police officers is arbitrary, capricious, and fundamentally irrational,” he said. “Now that the city has abandoned any pretense of a public health justification for vaccine mandates, we expect it to settle our pending lawsuits and reinstate with back pay our members who unjustly lost their jobs.”

The statements from others were as blunt. And to illustrate Lynch’s point about other pending lawsuits, the very next day the Supreme Court agreed to hear the lawsuit from detective Anthony Marciano.

Marciano sued the city last year challenging a policy requiring municipal workers be inoculated against Covid-19. He did not qualify for religious or medical exemptions, but instead argued he’d acquired immunity through his front-line service and should be free to make his own decision about getting the jab.

Adams is going to find his clearly arbitrary, capricious, and irrational policy increasingly difficult to justify, without serious cost. For example:

Asked at a Tuesday press conference how he could legally justify lifting one m andate and not the other, Adams did not offer a clear cut answer. “We do things. We roll things out slowly. Right now, that is not on the radar for us,” he said.

In other words, he can’t explain this absurd and dictatorial policy at all. Nor can any of the other Democratic Party politicians who have acted like petty dictators in the past two years. They have acted contrary to law, to science, to common sense, and to simple human dignity. Not only have all of their draconian and vicious COVID policies failed, they have also destroyed the lives of millions, in a vain effort to stop the spread of a flu-like illness that is practically harmless to 98 percent of the population.

In the Old World such politicians would have been tarred, feathered, and hung up on lampposts. In the just world that was once America, simply voting them out of office would have sufficed. Since the latter seems increasingly difficult, do not be surprised if eventually the former occurs.