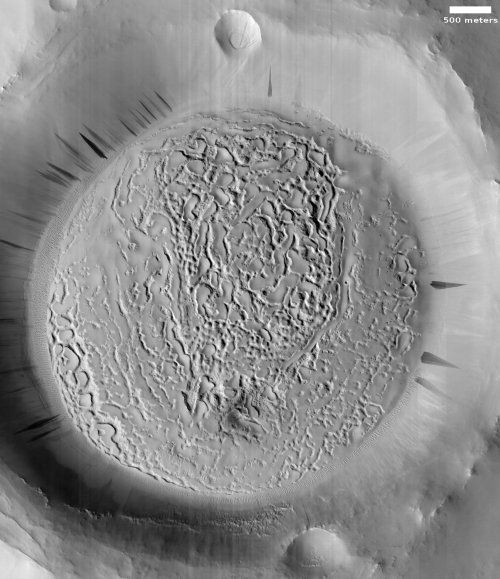 Today’s cool image well illustrates the effort of planetary scientists to map out the range of buried ice on the Martian surface. Taken on December 13, 2020 by the high resolution camera on Mars Reconnaissance Orbiter (MRO) and rotated, cropped, and reduced to post here, it shows a 3.5-mile-wide crater located in the southern cratered highlands, but for those cratered highlands at the very high northern latitude of 24 degrees.

The black streaks on the crater’s interior slopes are probably slope streaks, but these are not the subject of this article. Instead, it is the material that covers the crater’s floor. These features resemble the glacial fill material that scientists have found widespread in the latitude bands between 30 to 60 degrees latitude. However, this crater is farther south, where such ice would not be stable and should have sublimated away.

Could there still be ice here? I emailed the scientist who requested the photo, Colin Dundas of the U.S. Geological Survey’s Astrogeology Science Center in Arizona, and asked him what I was looking at. His answer:

This is an interesting image. It does indeed have morphology similar to debris-covered glaciers elsewhere on Mars. Some work by David Shean (published in Geophysical Research Letters in 2010) shows even lower-latitude crater-filling material resembling this.

Ice at these latitudes would be unstable at present, but it could be slowly sublimating if there was an episode of (geologically) recent deposition–Shean’s paper suggested that this could have occurred during recent high-obliquity episodes. Alternatively, it could be relict debris that was shaped by sublimation of buried ice that is now completely gone.

Based on the orbital data alone they as yet cannot make a certain determination. If however this is buried ice or even simply debris that marks the past presence of ice, it provides evidence of the earlier eons when ice and water were more ubiquitous on Mars, even in equatorial regions.

Finding out yay or nay will do much to clarify the geology of Mars, both past and present.