The Murray formation as seen in 2017

A new paper based on data gathered by the rover Curiosity in 2017 when it was lower on the slopes of Mount Sharp, as well as data obtained more recently at higher elevations, has confirmed that the past Martian environment of Gale Crater was wetter, and that deeper lakes formed lower down, as one would expect.

In 2017 Curiosity was traveling through a geological layer dubbed the Murray formation. It has since climbed upward through the hematite formation forming a ridge the scientists dubbed Vera Rubin Ridge to reach the clay formation, where the rover presently sits. Above it lies the sulfate-bearing unit, where the terrain begins to be get steeper with many very dramatic geological formations.

Looking across the entirety of Curiosity’s journey, which began in 2012, the science team sees a cycle of wet to dry across long timescales on Mars. “As we climb Mount Sharp, we see an overall trend from a wet landscape to a drier one,” said Curiosity Project Scientist Ashwin Vasavada of NASA’s Jet Propulsion Laboratory in Pasadena, California. JPL leads the Mars Science Laboratory mission that Curiosity is a part of. “But that trend didn’t necessarily occur in a linear fashion. More likely, it was messy, including drier periods, like what we’re seeing at Sutton Island, followed by wetter periods, like what we’re seeing in the ‘clay-bearing unit’ that Curiosity is exploring today.”

Up until now, the rover has encountered lots of flat sediment layers that had been gently deposited at the bottom of a lake [the Murray Formation]. Team member Chris Fedo, who specializes in the study of sedimentary layers at the University of Tennessee, noted that Curiosity is currently running across large rock structures [Vera Rubin Ridge and the clay formation] that could have formed only in a higher-energy environment such as a windswept area or flowing streams.

Wind or flowing water piles sediment into layers that gradually incline. When they harden into rock, they become large structures similar to “Teal Ridge,” which Curiosity investigated this past summer [in the clay formation]. “Finding inclined layers represents a major change, where the landscape isn’t completely underwater anymore,” said Fedo. “We may have left the era of deep lakes behind.”

Curiosity has already spied more inclined layers in the distant sulfate-bearing unit. The science team plans to drive there in the next couple years and investigate its many rock structures. If they formed in drier conditions that persisted for a long period, that might mean that the clay-bearing unit represents an in-between stage – a gateway to a different era in Gale Crater’s watery history.

None of these results are really surprising. You would expect lakes in the flatter lower elevations and high-energy streams and flows in the steeper higher elevations. Confirming this geology however is a big deal, especially because they are beginning to map out in detail the nature of these geological processes on Mars, an alien world with a different make-up and gravity from Earth.

Below the fold is the Curiosity science teams overall map, released in May 2019, showing the rover’s future route up to that sulfate unit, with additional annotations by me and reduced to post here. 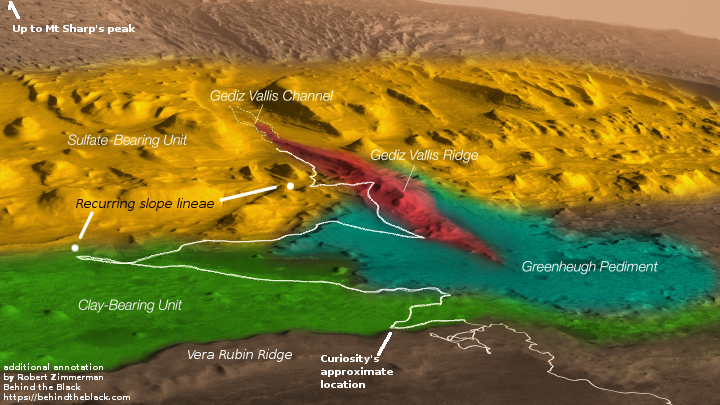