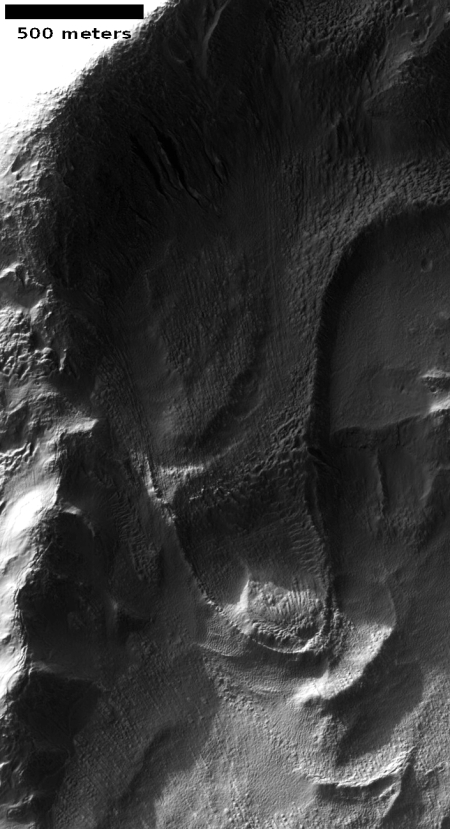 Cool image time! I could also call this another example of mass wasting, which it appears to be according to my understanding of Martian geological processes. However, the Mars Reconnaissance Orbiter science team dubbed this image “Tongue-Shaped Glaciers in Centauri Montes,” and I have no right to disagree with them.

The image to the right, rotated, cropped, reduced, and brightened to post here, shows the most prominent tongue-shaped glacier in the full image. The two curved ridges to the south of the glacier’s tip are almost certainly old moraines of debris pushed there during earlier events, when the glacier material extended farther out. In fact, if you look close you can see that this tongue lies on top of a larger older tongue that lines up with the closer of these two ridges.

This feature is located at 37 degrees south latitude, which puts it inside Mars’s southern glacial band that extends from 30 to 60 degrees latitude. According to the present defined types of Martian glaciers, this tongue is what scientists have dubbed a lobate debris apron, a glacier that in many ways resembles glaciers we see on Earth.

The location of this feature is especially interesting, especially because other images have found that it is not unique to this region. 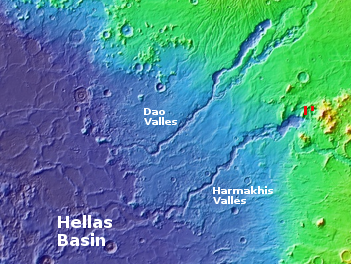 The map on the right shows its location as the larger of the two red boxes at the head of Harmakhis Valles. The smaller red box indicates the location of another image showing more nearby tongue-shaped glaciers, posted here in January 2019.

Based on the present understanding of the long term changes in the Martian climate due to the slow natural evolution of the planet’s inclination, when Mars’s inclination was as much as 60 degrees (compared to about 25 degrees today), glaciers accumulated at these mid-latitudes. As the inclination evolved to the present 25 degrees, the glaciers began to go away, with only those that were well-buried being protected. During that process the presence of ice and water at these mid-latitudes could have formed Harmakhis Valles [pdf], draining down into Hellas Basin. Later erosion processes, illustrated by the mass wasting of these buried glaciers, have significantly reshaped the floors and walls of these canyons.

These images however suggest that a lot of buried glacial ice might be found in this region. If you spend some time exploring the full image of today’s cool image, you will find more than a few other spots that suggest additional buried glaciers nearby.

There is water in them hills! Time for some prospectors to go and claim it!