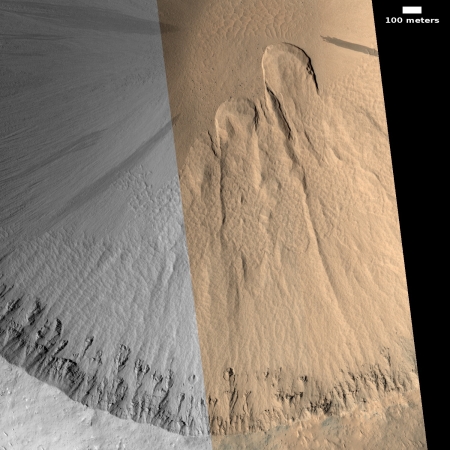 Cool image time! Mass wasting is a term that geologists use to describe a specific kind of avalanche, where the material moves down slope suddenly in a single mass.

The image on the right, taken from the image archive of the high resolution camera on Mars Reconnaissance Orbiter (MRO) and cropped and reduced in resolution to post here, shows a dramatic example of this kind of avalanche. You can see two separate avalanches, each of which moved a significant blob of material down slope into the center of the crater floor.

Studying such events is important. Scientists know that Mars has an underground ice table at high latitudes. What they don’t know is how far south that ice table extends. This crater is located at 5 degrees north latitude, almost at the equator, so if this avalanche exposed any ice in newly exposed cliff wall that would be a significant discovery.

Based on the color image, there does not appear to be any obvious ice layers, as seen in higher latitude scarps in the southern hemisphere. This doesn’t prove they aren’t there, merely that this image was unable to see them. Maybe the resolution is not good enough. Maybe the ice is too well mixed in with the dust and dirt and it therefore isn’t visible. Maybe the ice table is deeper underground than the deepest part of this crater.

Or it could be that at the Martian equator the underground ice is mostly gone. For future colonists, knowing this fact will influence where they put those first colonies. Near the equator has some advantages, but if there is little easily accessible water those advantages mostly vanish.

At the moment we simply do not know, though much of the imagery now being taken from orbit are attempts to answer this question.

One final detail about the image. Note the slope streaks coming down the crater’s slopes. These remain their own Martian mystery.