In March I obtained from my former publisher the last 30 copies of the now out-of-print hardback of Leaving Earth. I quickly sold 10, and with only 20 left in stock I am raising the price. To get your own autographed copy of this rare collector's item please send a $75 check (includes $5 shipping) payable to Robert Zimmerman to

Leaving Earth: Space Stations, Rival Superpowers, and the Quest for Interplanetary Travel, is now available as an ebook everywhere for only $3.99 (before discount) at amazon, Barnes & Noble, all ebook vendors, or direct from my ebook publisher, ebookit.

Winner of the 2003 Eugene M. Emme Award of the American Astronautical Society.

"Leaving Earth is one of the best and certainly the most comprehensive summary of our drive into space that I have ever read. It will be invaluable to future scholars because it will tell them how the next chapter of human history opened." -- Arthur C. Clarke

What Obama Fails to Understand
November 19, 2010 at 10:13 am Robert Zimmerman Points of Information

What Obama fails to understand.

How the U.S. Snoops on Russian Nukes From Space
November 19, 2010 at 9:57 am Robert Zimmerman Points of Information

How the U.S. snoops on Russian nukes from space.

NASA managers have once again delayed the launch of Discovery, now set for no earlier than December 3.

Astronomer and comet/asteroid tracker Brian Marsden has died. Marsden was the kind of gentleman that makes writing astronomy articles so much fun. Even when I was a newby science writer back in the early 90s he was always willing to answer any of my questions, and give me blunt and honest answers to boot. R.I.P.

Some cogent thoughts from James Delingpole about climate politics on the one year anniversary of the release of the climategate emails and the refusal of the elite ruling class to address the issue. Key quote:

And why is this so? In part, at least, it is because of the abject, ongoing failure of our Mainstream Media to report environmental issues with the robust scepticism that ought to be the natural tack of responsible journalists. Too many environmental reporters are still regurgitating press releases handed to them by activist organisations like the WWF, Greenpeace and Friends Of The Earth. In the MSM, as in government, it’s like Climategate never happened.

A snowstorm in space

Almost literally, the probe Deep Impact flew through a snowstorm when it flew past Comet Hartley 2 on November 4. Below is one of the best pictures from the moment. More images can be found here. Key quote:

[The images] revealed a cometary snow storm created by carbon dioxide jets spewing out tons of golf-ball to basketball-sized fluffy ice particles from the peanut-shaped comet’s rocky ends. At the same time, a different process was causing water vapor to escape from the comet’s smooth mid-section. This information sheds new light on the nature of comets and even planets. 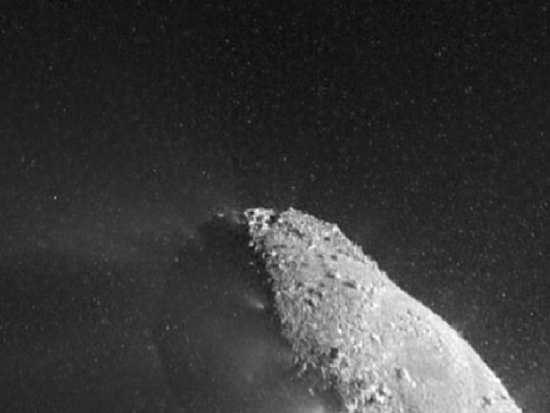 Note that all the close-up images taken by Deep Impact are going to be slightly out of focus, as the camera was launched with a defect.

How to properly fight terrorism
November 18, 2010 at 10:04 am Robert Zimmerman Points of Information

How to properly fight terrorism at airports.

Freedom of speech alert! Al Sharpton wants the FCC to threaten stations with a loss of their license if they carry Rush Limbaugh.

TSA allowed to unionize despite law forbidding such action
November 18, 2010 at 9:40 am Robert Zimmerman Points of Information

The law, a living document! The Federal Labor Relations Authority has given TSA staffers permission to unionize, despite the fact that the law creating the TSA expressly forbids such action. More here.

NASA management is reviewing the “flight rationale” for Discovery’s next mission, considering the cracks in the external tank. Key quote:

Troubleshooters are assessing the structural integrity of the tank and its foam insulation to develop the necessary flight rationale, or justification, for proceeding with another launch as early as Nov. 30.

The dying stars that look like jellyfish
November 17, 2010 at 10:23 pm Robert Zimmerman Points of Information

Scientists succeed in trapping atoms of anti-matter for the first time
November 17, 2010 at 10:20 pm Robert Zimmerman Points of Information

For the first time scientists succeed in trapping atoms of anti-matter. Key quote:

The team know the trap worked because they made about 10 million antihydrogen atoms which promptly obliterated themselves. Then they turned off their new trap and saw 38 more obliterations — meaning those 38 antihydrogens stuck in the trap.

Despite the howls of panic over the Gulf of Mexico oil spill this past summer, sea life is flourishing in the gulf. Key quote:

A comprehensive new study says that in some of the most heavily fished areas of the Gulf of Mexico, various forms of sea life, from shrimp to sharks, have seen their populations triple since before the spill. Some species, including shrimp and croaker, did even better. [emphasis mine]

Government marches on! Budget disagreements in the EU could delay construction of an experimental fusion reactor.

The space war delayed: The Senate has postponed its hearing on NASA’s future until December 1.

Feel the hate: A man shot his television in outrage over Bristol Palin’s success on Dancing with the Stars, then held off the police for fifteen hours.

Analyzing the actual and very minimal risks of terrors. And as I like to say: Live in fear, die in tyranny.

Climategate’s one year anniversary
November 17, 2010 at 10:00 am Robert Zimmerman Points of Information

What a difference a year makes! Tomorrow will the one year anniversary of the release of the climategate emails.

Lawsuits filed against TSA
November 17, 2010 at 9:54 am Robert Zimmerman Points of Information

the problems of human waste management in space
November 17, 2010 at 9:38 am Robert Zimmerman Points of Information

Sometimes going is hard: The engineering challenge of human waste management in space.

More security madness: A security summit in Kazakhstan is demanding the Russians bring home three astronauts from ISS a week early so as to keep the air space clear during the conference.

Penn at airport threatens to press charges against TSA for assault
November 17, 2010 at 9:29 am Robert Zimmerman Points of Information

A blow for freedom! Penn Jillette (of Penn & Teller) called the cops and threatened to press charges against a TSA security agent for assault during his airport screening. Fun quote:

I tell the cop the story, in a very funny way. The cop, the voice of sanity says, “What’s wrong with you people? You can’t just grab a guy’s crank without his permission.” I tell him that my genitals weren’t grabbed and the cop says, “I don’t care, you can’t do that to people. That’s assault and battery in my book.”

The story gets even crazier afterward, when a pr gal from the TSA calls Penn and tries to placate him. This quote is especially telling:

“If you give me your itinerary every time you fly, I’ll be at the airport with you and we can make sure it’s very pleasant for you.”

Stars merging
November 17, 2010 at 9:14 am Robert Zimmerman Points of Information

Astronomers have identified a dozen new binary star systems, where the two stars are tiny white dwarfs. Of even more interest is that a half dozen are spiraling into each other and will eventually merge, the ensuing collision likely producing a supernova explorsion.

Is the TSA backing down?
November 17, 2010 at 2:01 am Robert Zimmerman Points of Information

Is the TSA backing down?