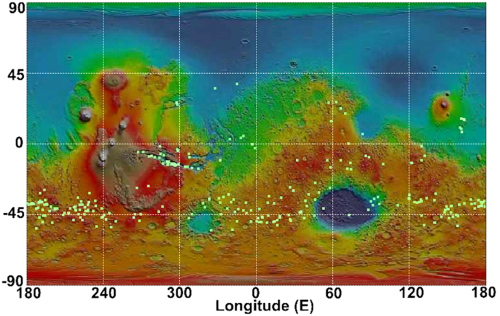 The uncertainty of science: A just-published survey of Mars following the 2018 global dust storm found that there was a significant increase in the seasonal dark streaks that scientists call recurring slope lineae, providing more evidence that these streaks are not caused by some form of water seepage but instead are related to some dry process.

The map to the right is figure 2 from that paper. The white dots show the candidate lineae that appeared following the 2018 global dust storm. About half were new streaks, not seen previously.

From the paper’s conclusion:
END_OF_DOCUMENT_TOKEN_TO_BE_REPLACED

The uncertainty of science: Scientists have proposed a new explanation for explaining the Martian seasonal streaks called recurring slope lineae that appear each spring and then fade over time.

Lineae, while unique to Mars, are different than the other similar Martian feature called slope streaks, which are not seasonal and have a somewhat different appearance and morphology.

This new proposal refines some of the past ideas for the seasonal cause of lineae.

Previous ideas suggested that liquid debris flows or dry granular flows caused this movement. Neither model can completely account for the seasonal martian flow features known as Recurring Slope Lineae (RSL). The team alternatively hypothesizes that small-scale ice melting in the near-surface regolith is causing changes at the surface that make it vulnerable to dust storms and wind. As a result, the RSL features appear and/or expand on the surface of Mars today. Further, the team believes that the thin layers of melting ice result from interactions between underground water ice, chlorine salts, and sulfates, which create an unstable, liquid-like flowing slush instigating sinkholes, ground collapse, surface flows, and upheave.

…Previous studies have suggested RSL are related to chlorine salts and noted their occurrence in regions of high sulfate outcrops. The current study extends these observations with a near-surface cryosalt activity model based on field observations and lab experiments. However, the exact mechanism of RSL formation on Mars still remains a mystery. [emphasis mine]

The mainstream press will make a big deal about this, but it really does nothing but add some nuance to previous theories. We really still do not know what causes lineae, as the highlighted text above notes.