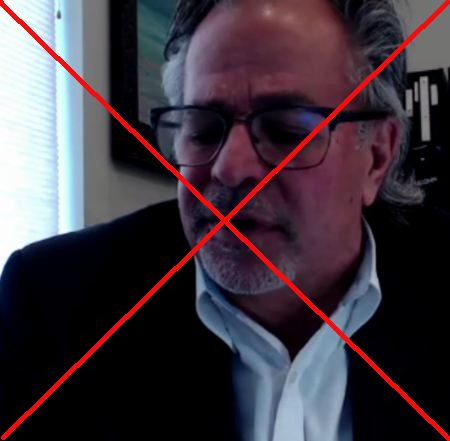 Bring a gun to a knife fight: Because officials in the state of Rhode Island continue to blacklist oral surgeon Stephen Skoly because of his refusal to get any COVID shots for health reasons, his lawyers have now filed an amended lawsuit, noting that Rhode Island’s shot mandates are now recognized as “irrational” by the CDC itself and should cease immediately.

This is a follow-up of an earlier blacklist story. In August 2021 Skoly had been forced to shut down his dental practice — serving 800 patients monthly — because the state had imposed a mandate requiring him to get COVID shots, even though he had already gotten COVID and had natural immunity, had serious health issues that made getting the shots unwise, and was willing to protect his patients with a high level face shield.

In February 2022 Skoly sued, and then expanded his suit in May 2022 when the state refused to grant him unemployment insurance for the time period his practice had been shuttered.

Skoly’s lawyers, from the New Civil Liberties Alliance (NCLA), have now amended the lawsuit again, noting that the CDC now recognizes that natural immunity gives as good if not better immunity than the COVID shots. And yet, Rhode Island is still demanding healthcare workers get the jab. From amended complaint [pdf]:
END_OF_DOCUMENT_TOKEN_TO_BE_REPLACED 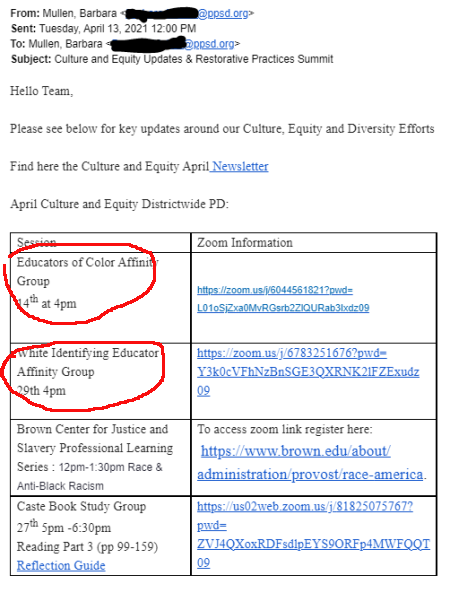 In October 2021 Romana Bessinger, a teacher for 22 years at a school in Providence, Rhode Island, suddenly discovered she had been suspended without pay and transferred to a no-work desk job because she had publicly criticized the school district’s effort to segregate teachers by race (see graphic to the right) while also making the the history curriculum an anti-white, anti-American diatribe.

Bessinger has now won back her teaching job. Just days before the school district was going to have to defend its position at her grievance hearing, it backed down completely.

I have received notification that coming this fall, I will have a permanent classroom assignment at Classical High. I have been freed from the basement. I’ll be back in the classroom this September sharing literature about the Holocaust, American authors with universal messages to share, historical references and literature that reflects the greatness of America in all her flaws and perfection. I’ll teach universal themes that all children can relate to, my classroom will have characters and poetry free of harmful political activism and full of accuracy. I hope to instill critical thinking, freedom of thought, rigorous activities that promote lively discussion unprompted by curriculum materials filled with propaganda.

Bessinger considers this a victory but I am not so sure. She might be back in the classroom free to teach history properly, but it does not appear the school district’s segregation policy nor its official curriculum promoting hate and bigotry have changed. As Bessinger noted in July 2021:
END_OF_DOCUMENT_TOKEN_TO_BE_REPLACED

Today’s blacklist story is an update from a story in February, where I outlined how the Rhode Island health department had irrationally shut down the practice of oral surgeon Stephen Skoly — denying 800 patients dental treatment and putting ten employees out of work — simply because Skoly had refused to get the COVID jab for valid medical reasons, including the fact that he had already gotten the Wuhan flu, had anti-bodies, and had other health issues that made getting the shot ill-advised.

Skoly had sued Rhode Island’s governor, Democrat Daniel McKee, as well as the head of the state’s health department, James McDonald. It now appears the lawsuit had some positive impact:

In March 2022, after over five months of suspension, and three days before a court hearing where medical experts were to testify to the irrationality of Rhode Island’s conduct, Rhode Island finally relented. It agreed to treat the N95 masked Dr. Skoly the same as other unvaccinated N95 masked workers. Dr. Skoly was permitted to re-assemble his ten-person dental team and return to practice.

The lawsuit, filed on behalf of Skolly by the New Civil Liberties Alliance, has not been abandoned, and instead has been expanded because of the state’s decision to deny Skoly unemployment benefits.
END_OF_DOCUMENT_TOKEN_TO_BE_REPLACED

Blacklists are back and the Democrats have got ’em: Proposed legislation by the Democrats who control Rhode Island’s government will both double the state income tax as well as impose a monthly $50 fine on anyone who has not yet gotten COVID shots.

Furthermore, employers will be subject to a monthly fine of $5,000 if they are found to be harboring any employees lacking shots.
END_OF_DOCUMENT_TOKEN_TO_BE_REPLACED

Don’t comply: Stephen Skoly, an oral surgeon in Rhode Island, has sued both his governor, Democrat Daniel McKee, and the head of the state’s health department, James McDonald, for shutting down his dental practice — serving 800 patients monthly — and preventing him (and his ten employees) from earning a living, simply because he has decided for medical reasons not to get the COVID shots.

Skoly, who’s been a dental surgeon since 1990, requested medical exemption from the COVID-19 vaccine because of his history of Bell’s palsy paralysis, the complaint says, and he says he has “natural immunity” against the virus because of a “blood test” that confirmed he has COVID-19 antibodies.

The modern dark age: Ramona Bessinger, a middle school teacher who had taught at her school in Providence, Rhode Island, for 22 years, was suspended without pay, then transferred to another school, because she had publicly criticized her school district’s effort to segregate teachers by race while changing its history curriculum to label white America as the source of all race hatred and black oppression.

When Bessinger showed up for work today [October 18], she was told to spend the day in the staff room. It was very cold in the room, and a local woman hearing of Bessinger’s plight, delivered a blanket for her: Late this afternoon Bessinger received word from her union rep on the outcome of the disciplinary hearing. Bessinger would receive a 5-day unpaid suspension, and Bessinger also would be transferred to another school.

The school claimed she was being punished because, during a school lockdown caused by a fight between a teacher and student, she allowed some students to leave her class anyway when the lunch bell sounded.

Bessinger denied the charges, noting that she had faced increasing hatred by administrators, teachers, and students because of her public criticism of the school’s new teaching syllabus, which encouraged hatred between the races and falsely painted America as a land of white supremacy. As she had written in July:
END_OF_DOCUMENT_TOKEN_TO_BE_REPLACED

Fascists: The Supreme Court of Rhode Island has ruled that it was proper for the government to order two Catholic firefighters to participate in a gay pride parade, even though it was against their religious beliefs.

When challenged about his gun control proposals and how they conflict with the second amendment, a Rhode Island state legislator responded “Go f–k yourself.”
March 25, 2014 11:06 pm Robert Zimmerman

Democratic civility: When challenged about his gun control proposals and how they conflict with the second amendment, a Rhode Island state legislator responded “Go f–k yourself.”

Video at the link. Note how gleefully he says it.