Sinkholes galore!
November 19, 2019 at 10:45 am Robert Zimmerman Points of Information 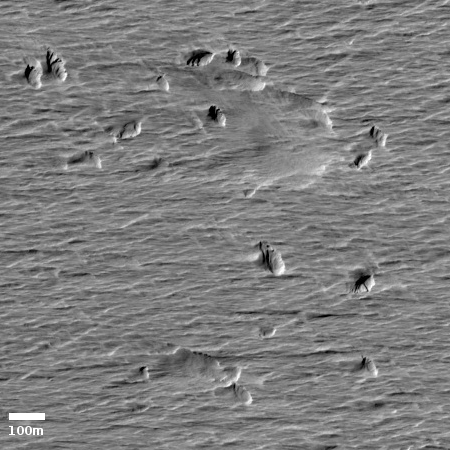 Cool image time! The photograph to the left, cropped to post here, was part of the November image dump from the high resolution camera on Mars Reconnaissance Orbiter (MRO). It shows a wind-swept dusty plain trending downhill to the west that is filled with more than a hundred depressions or sinkholes.

Unlike other pit images I have posted previously, this one is not focused on one particular pit or a string of pits. Instead, what makes it interesting is the large number of pits, scattered across the terrain in a random pattern. Their random distribution suggests that they are unrelated to any specific underground feature, such as a lava tube. Instead, some aspect of the underground geology here is causing the ground to sink at random points.

Below is an overview map showing where this dusty pit-strewn plain is located, indicated by the blue cross.
END_OF_DOCUMENT_TOKEN_TO_BE_REPLACED 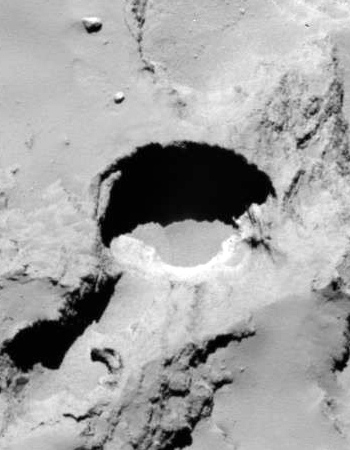 Based on the Rosetta observations, the team has proposed a model for the formation of these sinkholes. A source of heat beneath the comet’s surface causes ices (primarily water, carbon monoxide and carbon dioxide) to sublimate. The voids created by the loss of these ice chunks eventually grow large enough that their ceilings collapse under their own weight, giving rise to the deep, steep-sided circular pits seen on the surface of comet 67P/Churyumov-Gerasimenko.

The collapse exposes comet ices to sunlight for the first time, which causes the ice chunks to begin sublimating immediately. These deeper pits are therefore thought to be relatively young. Their shallower counterparts, on the other hand, are most likely older sinkholes with more thoroughly eroded sidewalls and bottoms that have been filled in by dust and ice chunks.

Essentially, they have found that decay of the comet’s nucleus has been mostly gentle and steady, rather than explosive, punctuated with sudden abrupt events.

Another cave found on Mars

Mars Reconnaissance Orbiter has found another cave on Mars. The cropped version of the image, shown below, shows a remarkably symmetrical crater that probably has more similarities to sinkholes on earth. In the center is a 100 foot wide skylight into a cave. The crater is almost certainly formed partly by material dropping into the cave. 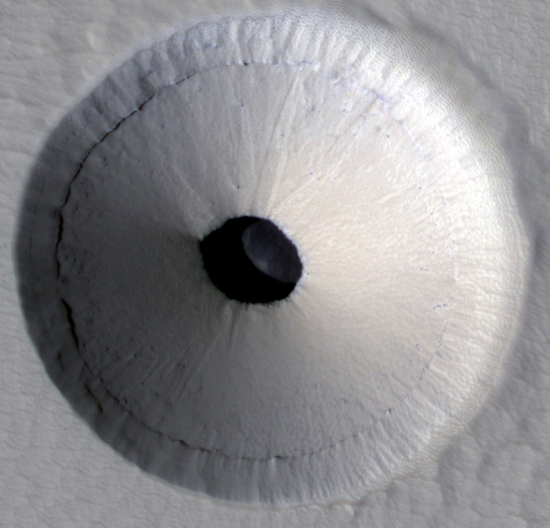 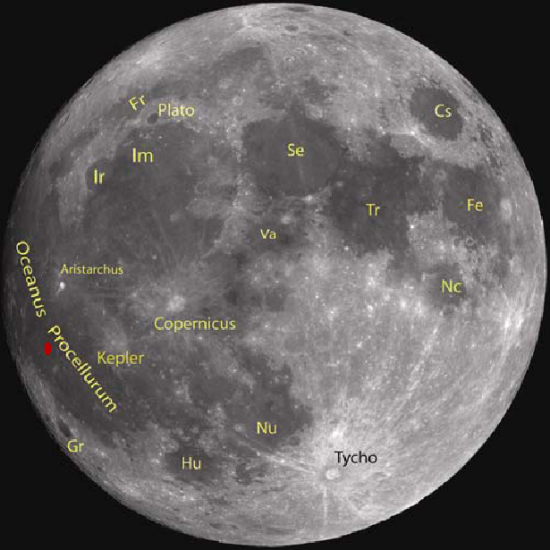 First the professional discovery. Yesterday, the Times of India reported the discovery of lava tube more than a mile long on the Moon. I did not post a link to the article because I didn’t think the news story provided enough information to make it worth passing along. Today however, fellow caver Mark Minton emailed me the link where the actual research paper could be downloaded [pdf]. This I find definitely worth describing.
END_OF_DOCUMENT_TOKEN_TO_BE_REPLACED

Caver alert! Releases this week from both the Mars Express orbiter and the Mars Reconnaissance Orbiter show a variety of sinkholes and collapse features on Mars, which in turn suggest the possibility of underground passages.

First, there is this picture from Mars Express, showing the area called Phoenicis Lacus (Latin for Phoenix Lake). 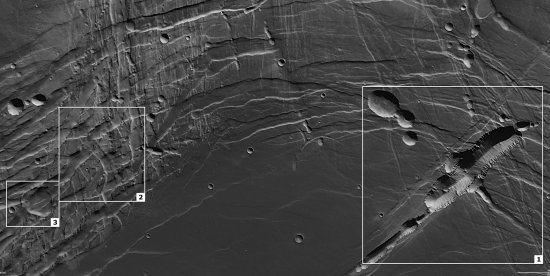 The large and long canyon in box 1 is actually a collapse feature, almost two miles deep and formed as this region was stretched, warped, and cracked by the powerful volcanic activity of the nearby giant volcanoes of the Tharsis plateau, including Olympus Mons, the solar system’s largest volcano. You can also see how this activity causes several sinkholes and craters in all three boxes to become elongated and distorted.

In places where the surface is deformed in this way on Earth, you often find tectonic caves, underground cracks produced as the ground is pulled apart. The large collapse feature suggests the possibility that there are voids below it.

Then there is this subimage from this release of Mars Reconnaissance Orbiter, showing the central peak and southern slope of an old crater in the Terra Sirenum region of the Martian southern hemisphere. 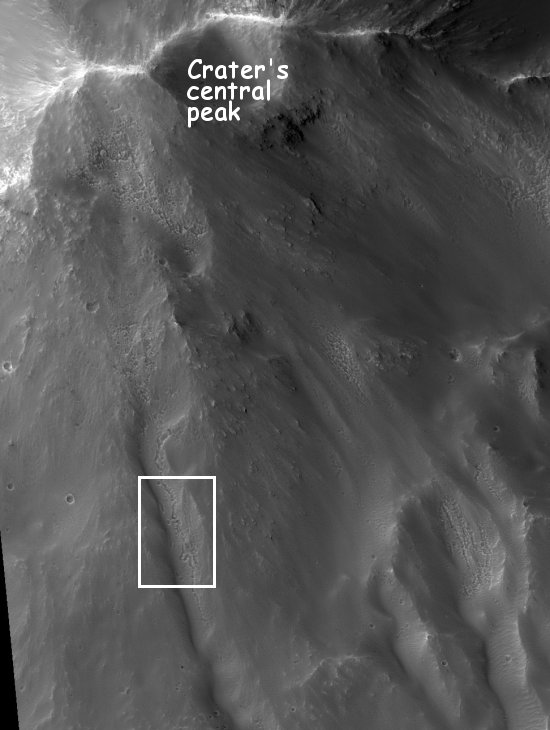 Down that south slope can be seen what look like fluvial-like flows. In the center of these flows as well as near the top of the peak are what appear to be a string of collapse features. Below is the close-up as indicated by the box above: 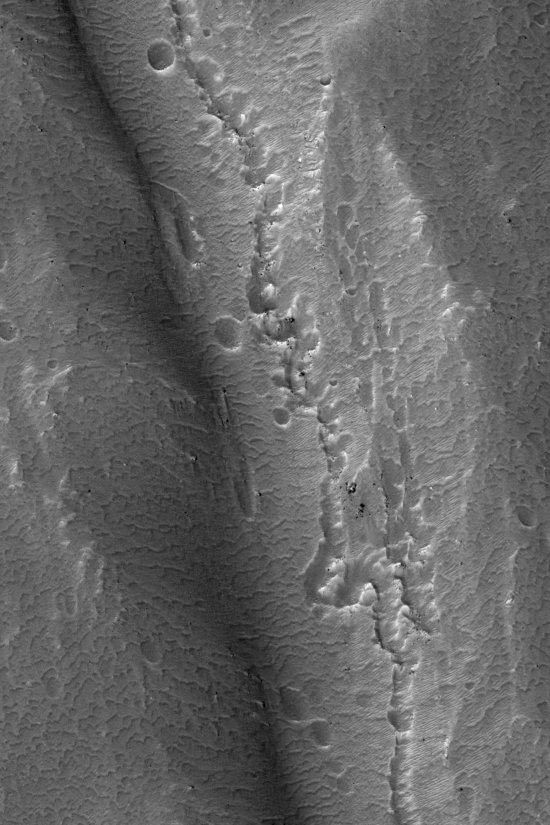 From the caption: “It is possible that these pits are evidence of subsurface piping or hydrothermal activity. Piping occurs when subsurface water flows through soil, takes some soil with it, and causes the overlying ground to collapse. These fluvial-like features and the connected pits may have formed during a late stage of crater formation when temperatures were suitable for liquid water.”

On Earth, this is one of the geological processes that forms sinkholes on the surface as well as caves underground. When cavers go out to look or dig for new caves, we often head for just this kind of string of sinkholes, as they are excellent evidence that an unentered cave lies hidden below, ripe for exploration.