February 3, 2020 at 8:49 am Robert Zimmerman Essays And Commentaries

On January 31, 2020 the Mars Society issued a press release touting its newest mock Mars habitat mission to its Mars research station in the high desert of Utah.

During this mission, one crew is operating at MDRS, while a second crew works out of the MAU habitat, which consists of a series of interlocking geometric tents that house crew quarters and a research area. The crew is made up of medical professionals who are testing how two teams on the same planet would collaborate on emergency medical procedures.

Located in southern Utah, MDRS serves as a home base for crews participating in Mars surface simulation testing and training. Depending on the individual crew’s specialization, its scientific focus ranges from geology to engineering, communications to human factors, robotics to microbiology. A wide variety of scientific and engineering research and educational outreach are typically conducted by crews at MDRS.

The newly-arrived MAU participants (designated as Crew 220) have set up their temporary second habitat close to MDRS, with part of the crew staying at the MDRS facility, while an additional crew is housed in the MAU-developed habitat out of sight of the main station. Halfway through the mission, the crews will rotate stations, thereby allowing each team an opportunity to experience both operational habitats.

While this simulated mission will certainly learn a few things about long term isolation by small crews, it does not appear to me to be a very real simulation of living on Mars. While the MDRS facility is quite sophisticated, it isn’t an entirely closed system. Moreover, the environment here, even in winter, does not come close to simulating the Martian environment. It is too warm and it has is a full atmosphere. And it certainly is not isolated. If someone gets seriously ill, or the facility experiences an irreversible failure, immediate evacuation is always an option.

Still, the Mars Society has been using this facility for simulating Mars missions since 2001, and has completed eighteen field seasons involving more than 1,200 participants. I am sure they have accumulated a great deal of useful data that can be applied on future Mars missions.

However, the U.S. has been running a much more realistic Mars simulation habitat since just after the end of World War II, and it appears that few realize it.
END_OF_DOCUMENT_TOKEN_TO_BE_REPLACED

The first person to cycle to the South Pole.
December 29, 2013 at 8:43 am Robert Zimmerman Points of Information

The first person to cycle to the South Pole.

Leijerstam used a modified version of the commercially-available Sprint trike, made by recumbent tricycle manufacturer Inspired Cycle Engineering (ICE). She chose to go with a recumbent trike because it would allow her to maintain stability in the often very-high winds. This allowed her to concentrate simply on moving forward, instead of having to waste time and effort keeping her balance. The strategy paid off, as she not only made it, but also beat two other cyclists who had set out for the Pole on two-wheelers, days before her Dec. 17th start date.

Cassini has now seen the beginnings of a vortex over Titan’s south pole, the first sign that winter is coming to the planet’s southern hemisphere.
July 10, 2012 at 3:52 pm Robert Zimmerman Points of Information

Turn, turn, turn: Cassini has now seen the beginnings of a vortex over Titan’s south pole, the first sign that winter is coming to the planet’s southern hemisphere.

Scientists can now use neutron detectors at the south pole to warn astronauts on ISS of incoming dangerous radiation.
July 6, 2012 at 12:02 pm Robert Zimmerman Points of Information

Scientists can now use neutron detectors at the south pole to warn astronauts on ISS of incoming dangerous radiation.

Studying the Moon by starlight 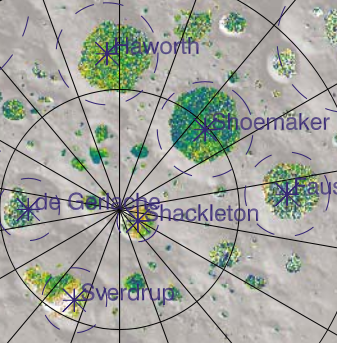 In a paper published today in the Journal for Geophysical Research, Planets, the science team for Lunar Reconnaissance Orbiter describe how they have used starlight to peer into the permanently shadowed craters of the Moon’s north and south poles. Looking only during the lunar night, they measured the dim albedo of the Moon from reflected starlight. From this very weak signal they were able to cull two interesting facts about these very cold and very dark places.

END_OF_DOCUMENT_TOKEN_TO_BE_REPLACED

The South Pole had its warmest day on record on Christmas Day this year
December 29, 2011 at 6:10 pm Robert Zimmerman Points of Information

The South Pole had its warmest day on record on Christmas Day this year.

Before the global warming crowd starts crowing, note that temperatures for December were actually quite normal, not colder or warmer than the average.

An evening pause: In honor of the 100th anniversary of Roald Amundsen’s arrival at the South Pole on this date, 1911, lets take a tour through the recently completed new Amundsen Scott South Pole station.

At one point right after walking through the cafeteria the cameraman points the camera out a window where you can see several flagpoles. That is where the actual South Pole is located. The camera than looks out a second window at a partly buried dome, which is the old station, no longer in use.

This video astonishes at what humans can accomplish in the most hostile environments.

Since the 1990s, scientists have suspected that water-ice might be hidden in the forever-dark floors of the polar craters on the Moon. If so, these locations become valuable real estate, as they not only would provide future settlers water for drinking, the water itself can be processed to provide oxygen and fuel.

Moreover, the high points near these craters, including the crater rims, are hoped to be high enough so that the sun would never set or be blocked by other mountains as it made its circuit low along the horizon each day. If such a place existed, solar panels could be mounted there to generate electricity continuously, even during the long 14-day lunar night.

Below the fold is a six minute video, produced from images taken by Lunar Reconnaissance Orbiter (LRO) from February 6, 2010 to February 6, 2011, in an effort to find out if such a place actually exists. It shows how the sunlight hits the south pole across an entire year.
END_OF_DOCUMENT_TOKEN_TO_BE_REPLACED

“We already knew there is a small perennial cap of carbon-dioxide ice on top of the water ice there, but this buried deposit has about 30 times more dry ice than previously estimated,” said Roger Phillips of Southwest Research Institute in Boulder, Colo. Phillips is deputy team leader for the Mars Reconnaissance Orbiter’s Shallow Radar instrument and lead author of the report. . . . “When you include this buried deposit, Martian carbon dioxide right now is roughly half frozen and half in the atmosphere, but at other times it can be nearly all frozen or nearly all in the atmosphere,” Phillips said.

What this discovery means is that, depending on Mars’ orbital circumstances, its atmosphere can sometimes be dense enough for liquid water to flow on its surface.

The first permanent building at the South Pole, built in the mid-1950s, has been destroyed
April 1, 2011 at 5:40 pm Robert Zimmerman Points of Information

The first permanent building at the South Pole, built by the U.S. in the mid-1950s, has been demolished with dynamite.