The importance of small telescopes to science and civilization

Largest cluster of telescopes on Mount Lemmon, six visible with three just out of view.

On December 11, 2019 I was kindly given a personal tour by Alan Strauss, director of the Mount Lemmon Sky Center, of the telescopes located on the mountaintops of the Santa Catalina Mountains overlooking Tucson. Strauss runs the educational outreach program for the University of Arizona astronomy department and the Steward Observatory, both of which operate the mountaintop facility.

The telescopes, numbering almost a dozen, are in two groups, two telescopes on the peak of Mount Bigelow and the rest clustered on the higher peak of Mount Lemmon. None are very gigantic by today’s standards, with their primary mirrors ranging in size from 20- to 61-inches. For comparison, the largest operating telescope in the world on the Canary Islands is 409 inches across. Hubble has a 94-inch mirror. And the new giant telescopes under design or being built have mirrors ranging from 842 inches (Giant Magellan) to 1,654 inches (European Extremely Large Telescope).

Thus, the small telescopes in the Santa Catalinas generally don’t make the news. They are considered passe and out-of-date, not capable of doing the kind of cutting edge astronomy that all the coolest astronomers hunger for.

Yet, without them, we likely would not have future astronomers. END_OF_DOCUMENT_TOKEN_TO_BE_REPLACED

A San Francisco store that sells telescopes to the public is suing two Asian telescope manufacturers — who make almost all recreational telescopes sold in the U.S. — for conspiring together to fix prices and create that monopoly.

Orion Telescopes and Binoculars, which is headquartered in Watsonville and has stores there and in Cupertino, is seeking more than $180 million in damages in a lawsuit. A federal court in Northern California said the complaint against telescope maker Ningbo Sunny, filed in 2016, can go to trial. A subsidiary of Ningbo Sunny, a Chinese company, bought Irvine telescope maker Meade Instruments in 2013.

In the complaint, Orion alleges that Ningbo Sunny and a Taiwanese telescope manufacturer, Synta Technology, shared confidential information that competitors normally would not share, including product pricing, order forecasts and credit arrangements.

My question is this: Why are no American telescope manufacturers competing in this market? Are our labor costs too high? Our government regulations too restrictive? A little bit of competition could easily end this collusion by these Asian manufacturers, assuming it is happening.

The National Science Foundation has declined until 2020 to commit to funding a giant American-built ground-based telescope
January 3, 2012 at 9:28 pm Robert Zimmerman Points of Information

Bad news for American astronomy: The National Science Foundation has declined until 2020 to commit to any funding for either one of the two giant American-built ground-based telescopes.

For nearly a decade now, two university consortia in the United States have been in a race to build two ground-based telescopes that would be several times bigger than today’s biggest optical telescope. One group—led by the University of California—plans to build the Thirty Meter Telescope (TMT) in Hawaii. The other team—led by Carnegie Observatories, the University of Arizona, and other institutions—is developing a 28-meter behemoth named the Giant Magellan Telescope (GMT), which would be built in Chile. Over the past few years, both teams have raised tens of millions of dollars toward the billion-dollar-plus projects in the hope that the U.S. National Science Foundation (NSF) would come up with the balance.

But now, it turns out, neither project has a chance of receiving any significant funding from NSF for at least another decade. In a solicitation posted by NSF last week, the agency indicated that it does not expect to fund the building of any giant segmented mirror telescopes—that is, TMT or GMT—until the beginning of the 2020s. According to the solicitation, all that NSF can provide right now is $1.25 million over 5 years for the development of a public-private partnership plan that could eventually lead to the building of a large telescope, should NSF be in a position to fund such a telescope sometime in the next decade.

I suspect the NSF’s unwillingness to fund this project at this time is directly related to the budget crisis in Washington. Though the NSF got slightly more money in 2012 than in 2011, that money is all accounted for by other projects. There is no margin for anything new that will be as expensive (in the billions) as these giant telescopes will be.

Private citizen commits $25 million for Giant Magellan Telescope
May 17, 2011 at 10:59 am Robert Zimmerman Points of Information

Private citizen has just donated $25 million for the construction of the Giant Magellan Telescope.

This is how it used to be done all the time: All the early giant telescopes built in the United States before World War II were financed by individuals or private foundations, with no or little government investment.

Correction.Regular reader James Fincannon emailed me to say that he thinks the image below is an artist’s impression. He is correct. I should have looked more closely at the press release. In reading the actual research paper [pdf] on the results it seems that the VLT did some very sophisticated spectroscopy, thereby measuring the uneven distribution of the velocity and density of the gas around the star. The image below was then created, based largely on Hubble images combined with the new data. In other words, this ground-based telescope did not match the abilities of a space-based telescope in any way. Had the Hubble images not existed the astronomers would have struggled to interpret their spectroscopic data. 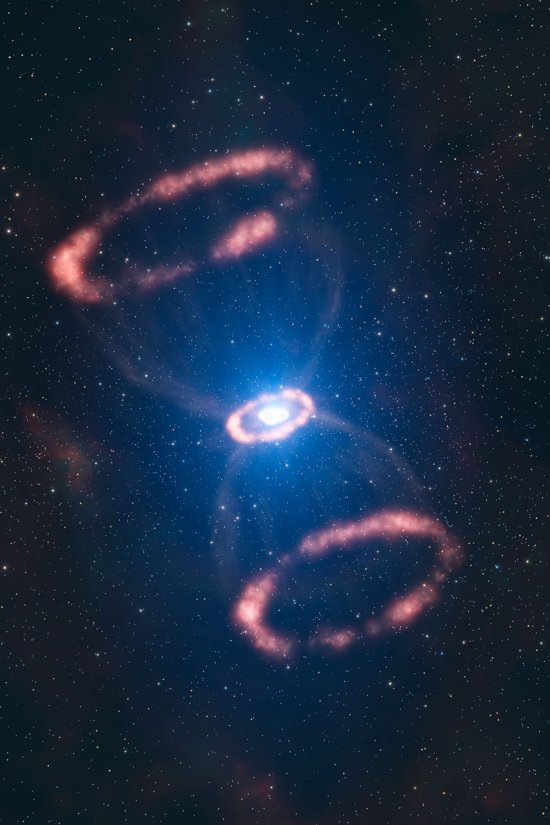 The data shows that the supernova explosion was not symmetrical, with more material being thrown outward in some directions than in others. This fact confirms what astronomers in recent years have increasingly come to believe: Supernovae explosions are not simple spherical bursts, but chaotic events ripping stars apart in a lopsided manner.

Keith Cowing at NasaWatch notes quickly that the current budget battles over NASA have people in NASA concerned about the future of the James Webb Space Telescope. The telescope has further cost overruns, and should NASA end up operating under a continuing resolution rather than a full budget, there won’t be enough money to keep the project above water.

Astronomy near the North Pole
July 13, 2010 at 11:32 am Robert Zimmerman Points of Information