Phil and John Cunningham plus others

An evening pause: To quote from the youtube page: “A live session from the 1991/92 BBC Scotland broadcast, featuring the Cunningham brothers from Silly Wizard, Charlie MacKerron and Donald Shaw from Capercaillie, Ian MAcDonald from Ossian and various members of the Rankin Family, from Canada.”

It’s all good, but stay with it for the Irish dancing near the end.

Orbital Sciences gets its launch license for first test of Taurus 2 rocket
August 31, 2011 at 2:32 pm Robert Zimmerman Points of Information

Orbital Sciences has gotten its launch license from the FAA for the first test launch of the Taurus 2 rocket, scheduled for later this year.

This rocket is Orbital’s version of the Falcon 9. It is a new rocket, never before flown, yet after this test it is scheduled to fly the Cygnus capsule on its first flight only two months later. Talk about cutting things close!

Russians are considering reducing their participation in ISS
August 31, 2011 at 2:28 pm Robert Zimmerman Points of Information

Uh-oh! The Russians are considering reducing their participation in ISS. Their government might also take over entirely the private portion of their space industry.

Using Hubble Space Telescope images taken over a 14 year period, a team of astronomers led by Patrick Hartigan of Rice University have produced six very short time-lapse movies, showing the changes that have occurred to a variety of interstellar jets and bow shocks over time. The one below is my favorite. They are all worth looking at, as they illustrate forcefully how the changeless heavens are not so changeless.

Federal government prosecutes a man for shooting a bear to protect his family
August 31, 2011 at 9:19 am Robert Zimmerman Points of Information

We’re here to help you! The federal government, under the Endangered Species Act, is prosecuting a man for shooting a bear to protect his family.

25 Signs That The Financial World Is About To Hit The Big Red Panic Button
August 31, 2011 at 1:19 am Robert Zimmerman Points of Information

The day of reckoning looms: Twenty-five signs that the financial world is about to hit the big red panic button.

Juno looks back and sees the Earth and the Moon
August 30, 2011 at 10:48 pm Robert Zimmerman Points of Information 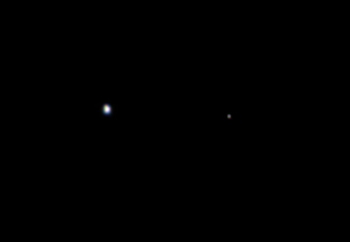 Juno, on its way to Jupiter, took a look back and snapped this picture of the Earth/Moon double planet.

Gives us a glimpse at what our home planet will really look like to future spacefarers, either on they way out or on their way home.

NASA Names Astrophysics Fellowship For Nancy Roman, one of the key people behind the Hubble Space Telescope
August 30, 2011 at 6:42 pm Robert Zimmerman Points of Information

NASA has named an astrophysics fellowship in honor of Nancy Roman, who helped design and build the Hubble Space Telescope.

More information on why the Soyuz-U rocket failed
August 30, 2011 at 6:39 pm Robert Zimmerman Points of Information

More details on why the rocket carrying the Progress freighter to ISS failed last week.

Up to now, exchanging the boxes was done by spacewalkers, which always carries a certain level of risk. Dextre was designed to reduce the need for astronauts to conduct spacewalks for routine maintenance, therefore freeing up the crew’s time for more important activities, like conducting science.

Fire them! Police confiscate a woman’s legal guns, then refuse to return them despite admitting they are legally owned.

Her cache [of weapons] somehow caught the attention of Lakewood Police, who paid a visit last September. When they found Rice wasn’t home, they asked an obliging employee of the complex to open up the apartment without her consent. Once inside, they raided the gun rack, making off with 13 firearms worth around $15,000. The only problem: They had no apparent reason to. [emphasis mine]

Not only did the police essentially steal her property, they entered her apartment illegally.

If ISS becomes unmanned, the first test of Dragon will also be delayed
August 30, 2011 at 1:50 pm Robert Zimmerman Points of Information

More possible consequences if ISS becomes unmanned: the first test of Dragon will be delayed.

An unmanned ISS will also delay the first launch in February of Orbital Sciences Cyngus cargo vehicle, as this vehicle is like Dragon in that it requires astronauts on board ISS to control the robot arm that grabs and berths the spacecraft.

Obama’s National Labor Relations Board has now told a Catholic university it is not religious enough to be exempt from union organizing, even though the Supreme Court has ruled the board has no right to do any such thing.

A preliminary cause for the Russian launch failure has been found
August 30, 2011 at 9:19 am Robert Zimmerman Points of Information

Good news: The Russians have pinned down a preliminary cause for the Progress launch failure last week.

Solving this quickly appears essential, as the space station was not really designed to fly unmanned.

Past NASA risk assessments show there is a one in 10 chance of losing the station within six months if astronauts and cosmonauts are not onboard to deal with any critical systems failures. The probability soars to a frightening one in two chance — a 50-percent probability — if the station is left without a crew for a year.

Alison Krauss and Yo Yo Ma – Slumber my darling

An evening pause: a song by Stephen Foster.

Al Gore and the silencing of debate

Yesterday I posted a link to a story about Al Gore claiming that any expression of skepticism about global warming is to him no different than racism. Here again is what Gore said,

More than at any other time, Gore here has very successfully illustrated the differences between how climate skeptics debate the scientific questions of climate change versus how global warming advocates do it.
END_OF_DOCUMENT_TOKEN_TO_BE_REPLACED

It’s now official: The Russians will postpone the launch of the next crew to ISS, as well as delaying the return of one crew presently on board.

New EPA regulations will shut down 8 percent of U.S. power generation capability
August 29, 2011 at 10:31 am Robert Zimmerman Points of Information

We’re here to help you! New EPA regulations threaten to shut down 8 percent of all U.S. power generation capability.

Nor should this be a surprise. During the campaign Obama admitted, but few reported, how he wanted to bankrupt any power plants that used coal to generate power.

An overview of the space war situation by Clark Lindsey
August 29, 2011 at 9:54 am Robert Zimmerman Points of Information

Clark Lindsey has written a very nice and short summary of the present political battles over NASA’s budget and its future manned space rockets.

Power is still out here in DC (as of 11:43 pm Sunday), so my posting must remain light.

Why it takes Pepco so long to restore power to our area, and why this seems to happen ever time there is a storm of any kind, remains a very annoying mystery to me.

An evening pause: In Glacier National Park in August 2011. From Mark “Indy” Kochte.

Al Gore calls climate skepticism the same as racism and calls for treating skeptics the same.

In other words, no expression of skepticism is to be permitted, in any conversation.

I’ll have more to say about this later today or tomorrow.

Space station could be abandoned in November
August 28, 2011 at 11:44 am Robert Zimmerman Points of Information

The space station could be abandoned in November if the Russians haven’t solved their rocket problems by then.

Hunkering down during the hurricane

Update: We lost power at around 12:30 am, and as of mid-morning Sunday the power was still not back. Thus, my posting will be light today. At the moment we are out at a local restaurant that has power (and food!), so I am using my laptop to post.

As I sit here waiting for Hurricane Irene to speed past Washington, DC, leaving behind a lot of water, some fallen trees, and the likelihood of a power outage, I thought I’d mention that I will be doing a special 30 minute appearance tonight on the nationally syndicated John Batchelor radio show at 9 pm (Eastern). Should be fun, with New York City shut down and me possibly doing the interview in the dark, with no power.

Update and bumped. The hurricane where I live here in the DC area has so far been quite mild, with only a few short bursts of heavy rain and hardly any wind. However, John Batchelor had so much fun with our discussion at 9 pm that I am coming back for another half hour at 11:30 pm (Eastern).

One more note: I consider the decision of Mayor Bloomberg in New York to shut down the subway and buses for the weekend to be downright madness. The subway should run until the last minute, in case people need to leave. Closing it so the government employees can get out is like a captain deserting his ship ahead of the passengers.

Unfortunately, this kind of political overreaction is what you get when you cede too much power to politicians. They have to act, if only to appear as they are doing something.

Jetman flight at the Grand Canyon West may 2011

It appears that payback by the Obama administration against its political opponents is the main reason the Justice Department raided the Gibson guitar company. Its CEO donates to Republicans, while Gibson’s main competitor – never raided – donates to Democrats.