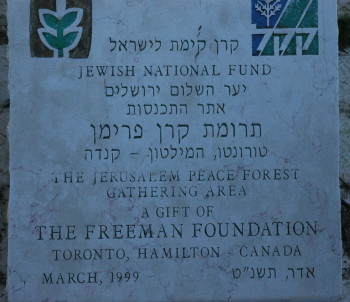 In 2003 my oldest nephew was married from the highest point on this hillside, just above the Peace Forest, with the entire city of Jerusalem as the backdrop. At the time there was a catering hall at this location, and it seemed to them to be a perfect place to tie the knot. 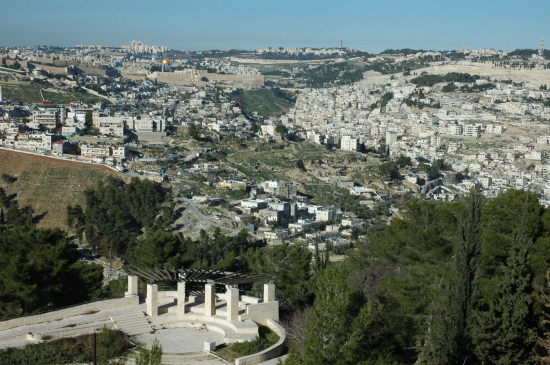 The view of Jerusalem from the spot just above the Peace Forest, where my nephew had been married in 2003. Both the Old City of Jerusalem and the gold dome of the Dome of the Rock can been seen near the top center left.

In my visit to Jerusalem last week we decided to revisit this spot. Sadly, sometime in the past ten years the catering hall had gone out of business, which my nephew guessed was partly due to the neighborhood. It seems that this location, nestled between Jewish and Arab communities, was not very safe, with several attacks of visitors having occurred over the years. The attacks were not necessarily related to Arab-Israeli friction, but could simply be an example of the criminal elements of either community taking advantage of a relatively isolated park location. 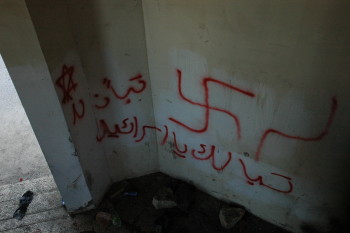 Vandalism in one of the Peace Forest observatory points

Nonetheless, the sad state of this park on my visit last week illustrated to me some of the difficulties faced by everyone who lives in Israel. Each of the observation points had been badly vandalized and spray-painted with graffiti, one with Nazi swastikas. The park is still relatively unvisited, and had the decrepit feel of an abandoned building occupied by squatters.

You see, the Peace Forest still separates two neighborhoods, the Israeli from the Arab. As much as its creation and renovation by the Jewish National Fund was filled with good will and a hope for peace, the Peace Forest has merely ended up illustrating the uselessness of feel-good gestures that have no actual contact with reality. Even though the Israelis have made repeated efforts like this over the decades to bridge that gap between the two communities — illustrated so poignantly by this very park — those efforts have always come to naught.

In order to bring “peace and serenity between all Jerusalem’s residents,” it is necessary for both the Israelis and the Arabs to do something. An empty gesture of good will by just the Israelis alone accomplishes nothing.

Until these facts change, no gesture of good will by anyone is going to bring us any closer to peace in the Middle East.

One last thought. In general, I have never been enthused by the partition of Palestine as imposed by the United Nations in 1948. Driven by good intentions (Oh that phrase!) after the Holocaust in World War II, the members of the U.N. tried to give the Jewish people a home that they could call their own.

Such a division — nowadays dubbed by naive politicians the “two-state solution” — is always a problem, as it almost guarantees that at some point in the future each state is going to forced to treat those not of their particular sect as second class citizens. For if the population of Israel becomes dominated by Muslims, how then can one still call that a Jewish state?

Though I do not believe for an instant that the PLO was sincere in its demand for a single Palestinian state where both Jews and Arabs live peaceably, this really is the only true solution to the Israeli conflict. Palestine should be a single state, and the question of whether you are a Jew, Muslim, or Christian should be irrelevant to its existence.

Is this possible? Is it even realistic? I sincerely doubt it, given the religious importance of Jerusalem and the history of the past six decades. Nonetheless, the Israelis have at least shown that it can be done, if only partly, if you make the effort. As I have noted already, in Israel both Jews and Muslims are given full rights as citizens. In Israel at least there is an effort to treat all human beings equally with honor and justice.

When the Arab Palestinians finally show some signs of doing the same, only then will we finally see a glimmer of hope that “peace and serenity between all of Jerusalem’s residents” will be possible.