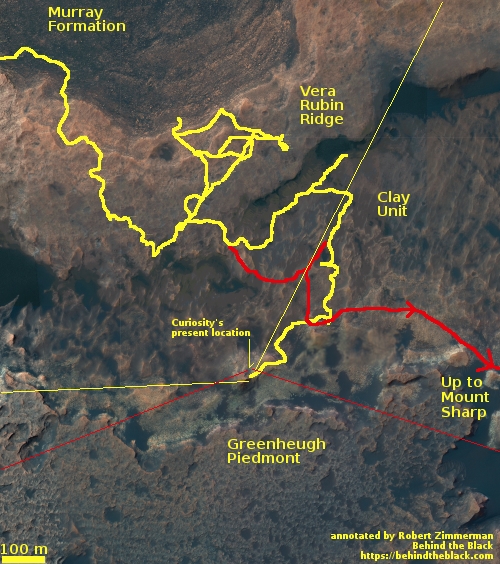 Since my last Curiosity update on November 6, 2019, the science team has sent the rover climbing up what they call Western Butte, the butte directly to the west of Central Butte and part of the slope/escarpment that separates the clay unit from the Greenheugh Piedmont and the sulfate unit above that.

The overview map to the right gives a sense of the journey. The thick yellow line indicates its route since it climbed up from the Murray Formation onto Vera Rubin Ridge in 2017. The thick red line indicates their planned route, which they have only vaguely been following since their arrival in the clay unit.

Below the fold are two panoramas that I created from a sequence of images taken by Curiosity’s left navigation camera from the high point on Western Butte, the first looking north across the crater floor to the Gale Crater rim approximately 30 miles away and indicated by the thin yellow lines on the overview map. The second looks south, up hill towards Mount Sharp, and is indicate by the thin red lines.

In the past two months the science team has moved the rover west and then up the steep slope of Western Butte, studying the geology layers along the way. As noted in their January 9, 2020 update,

The team would like to understand the composition, morphology, and ultimately, the origin of the capping unit of this butte [what they dub the Greenheugh Piedmont]. …The rocks look really interesting and unusual, but the butte is too steep to drive to the top to sample them. Fortunately, nature is kind to us, and somewhat like humans drop scraps to their pet dog under the table, nature has rolled some samples down to where the rover is.

In the process the rover gained about 50 feet in elevation in about 260 feet, up a steep incline that by my estimate exceeded 20 degrees at times. Right now Curiosity is at about 13,450 elevation below what is considered the Martian “sea level,” defined by the average elevation around the equator. The top of Mount Sharp is about 4,600 feet above that sea level, which means the rover still has about 18,000 feet to climb to get to the peak.

To get a sense of how far the rover still has to go, since landing on the floor of Gale Crater in August 2012, the rover has only climbed about 1,000 feet. In fact, up to now it has barely touched the foothills of Mount Sharp. The really spectacular scenery is yet to come.