After finally reaching the top of the Greenheugh Pedimont (see both the March 4 and March 8, 2020 rover updates) and spending more than a month there, drilling one hole, getting samples, and taking a lot of photos, the Curiosity science team in the past week has finally sent the rover retreating back downhill, following the same route it used to climb uphill.

The panorama above was taken on April 10, 2020, and shows the last view looking south across that pedimont towards Mount Sharp, before that descent. As you can see, trying to traverse that terrain would have been very difficult, and probably very damaging to Curiosity’s wheels. 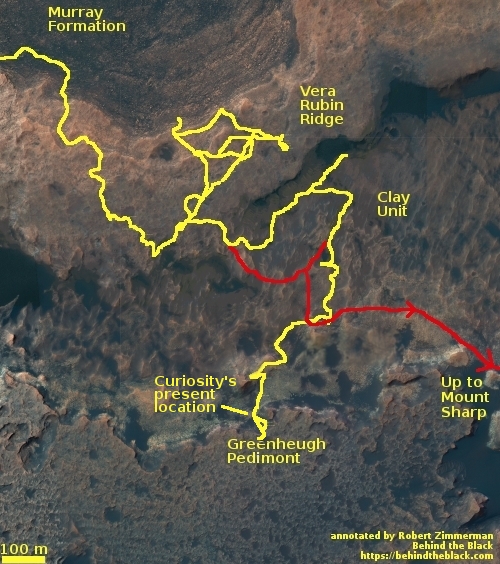 The long term plan is to skirt these badlands at their base, heading to the west and around them until the rover reaches the foothills at the base of Mount Sharp, seen at the base of the mountain, directly below its peak. The overview map to the right shows the original planned route in red. The yellow line shows Curiosity’s actual travels. As you can see, they took a significant detour to make this stop at the top of the Greenheugh Pedimont.

The detour was very worthwhile, however, since they will not see the top of the pedimont again for at least a year, if not more. Should something happen to Curiosity before then, this detour will have gotten them some very valuable geological data that they would not have had.

Once the rover reaches the foothills it will once again head uphill to the top of the pedimont, but this time at its edge where the going should be better. It will then head for the Gediz Vallis Channel, a canyon very reminiscent of the slot canyons of the American southwest, with smooth and scoured walls. The map shown at my March 8, 2020 Curiosity update clearly illustrates this entire route. 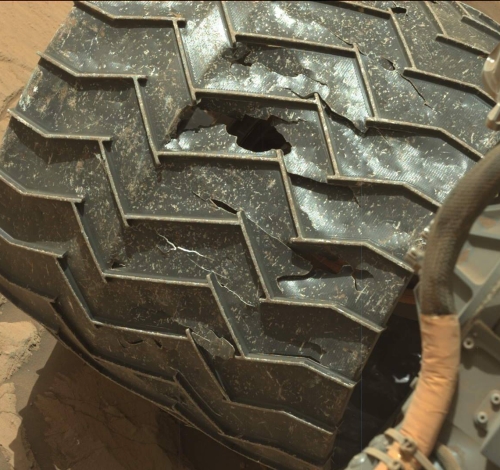 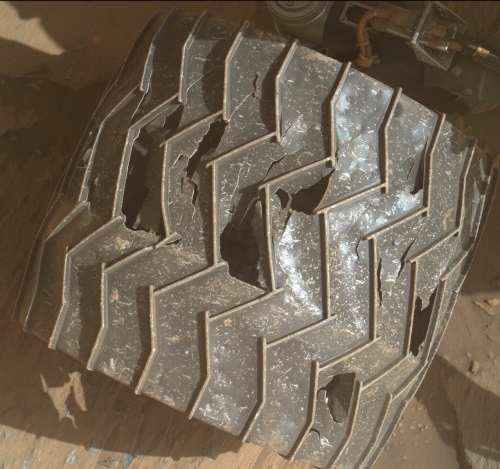 Just before heading downhill, the science team did another photographic survey of Curiosity’s wheels to see how they are holding up during the climb and the travels on the pedimont. I have reported on these wheel damage surveys previously (see my July 9, 2019 report). The two images on the right are from this most recent review and show what I think is probably the worst damage on two different wheels.

Unfortunately, I was unable to match either or any of the new images with past wheel images to illustrate how things have changed. Previously a comparison of old and new images would show that the damage in the new photo was generally unchanged from the earlier image, indicating that wheels are holding up well despite the breakage.

This time I was unable to do this. In looking at all the new wheel images, my impression is that there is some new damage, but not so much as to stop the rover in its travels. Nonetheless the damage seen here, especially in the second image, is worrisome. It further justifies the decision to not spend much time up on the Greenheugh pedimont, with its broken, rocky, and very rough surface.

The panorama below, taken just as the rover was reaching the pedimont top, illustrates this. Had they decided to continue there, they probably would have chewed up Curiosity’s wheels very quickly, ending the mission in short order. Instead they have returned to the smooth clay unit below, where they can move fast with few rough spots to worry about as they circle the pedimont for the base of Mount Sharp.