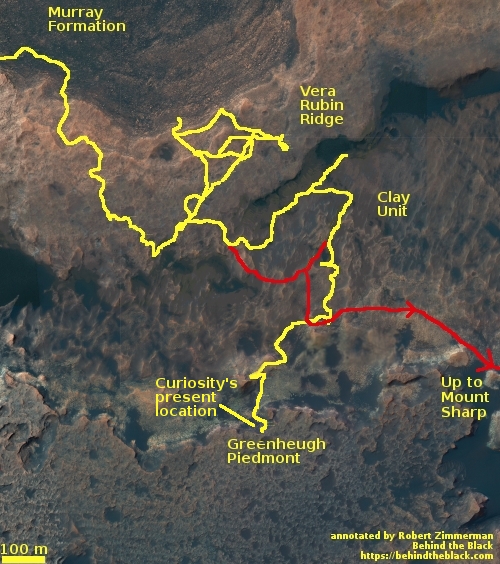 Since my last rover update on January 13, 2020, Curiosity has finally moved on from the base of Western butte, where it spent more than a month drilling a hole and gathering a great deal of geological data. Rather than head downhill and around the plateau and back to its planned route (as indicated by the red line in the map to the right), the Curiosity science team decided to push upward and onto the Greenheugh Piedmont (as indicated by the yellow line).

They had always planned to reach the top of this plateau, but not for several years. First they were going to head east to study a recurring slope lineae (see my October 2019 update), an example of a dark streak that darkens and fades seasonally and could provide evidence of water seepage from below ground.

Instead, they decided the close proximity of the top of the piedmont and its geology was too tempting. The piedmont is apparently made up of a layer that is very structurally weak, and breaks up easily, as you can see by the panorama above. It also appears to sit on softer, more easily eroded material, which thus accentuates this break up. If you look at the left part of the panorama you can see what I mean. The piedmont layer there is the thin unbroken layer sitting on what looks like sand. As that sand erodes away the layer quickly breaks into small pieces, as shown in the rest of panorama.

Traveling on the piedmont will likely be difficult and threaten Curiosity’s wheels. I suspect this reality prompted them to choose to get to the top and obtain data now, rather than wait several more years of rough travel that might have made access to the piedmont difficult if not impossible.

They presently sit just below the top, and are studying their options before making that last push. At this location the rover sits on a 30 degree slope, only slightly less steep than the 32 degree record slope achieved by Opportunity at Endeavour Crater in March 2016. The photo to the right, showing Curiosity’s robot arm back-dropped by the distant floor and rim of Gale Crater, has been rotated to show that steep slope.

To celebrate their success in the past few months exploring these higher reaches of the foothills of Mount Sharp, today they released a spectacular panorama, with the highest resolution of any yet produced, looking downhill from the base of Central Butte, taken back in October and November during the several months they had spent at that location. A lower resolution version, showing Curiosity in the foreground, is below, reduced even more to post here.

Make sure you click on the full image. It really puts you there, on Mars, looking north and out across Gale Crater.

I have been posting updates on the Chinese Yutu-2 rover and Chang’e-4 lander on the far side of the Moon, as they happen, the most recent of which were on February 27, 2020 and March 2, 2020. Both rovers appear to be in good operating condition, despite having survived fifteen lunar days and nights, five times more than originally planned.

This coming summer a flock of new rovers plus one orbiter are going to launch for Mars. The U.S. will send another Curiosity-class rover, with its official name to be announced tomorrow, to Jezero Crater. China is also supposed to send an orbiter, lander, and rover, but almost no updates about this project have been released recently.

A joint Europe-Russian mission, ExoMars2020, is supposed to send the rover Rosalind Franklin to Mars, but technical problems could very well delay that rover’s launch by two years. We shall find out by the end of March.

Finally, the United Arab Emirates intends to send its Hope orbiter to Mars this summer. Built with Indian help and launched by Japan, the UAE hopes that this mission will help them diversify their economy and inspire their youth to do more than simply collect checks from their oil profits.