A closer close-up of Ceres’ double bright spot
June 22, 2015 at 9:19 am Robert Zimmerman Points of Information 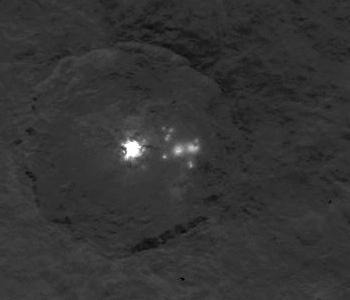 Cool image time! In a new press release, the Dawn science team has unveiled a new close-up of Ceres’ double bright spot, shown on the right.

At least eight spots can be seen next to the largest bright area, which scientists think is approximately 6 miles (9 kilometers) wide. A highly reflective material is responsible for these spots — ice and salt are leading possibilities, but scientists are considering other options, too.

In other words, they still have not confirmed through spectroscopy, that these bright spots are ice.

Note also that they have reduced the image’s brightness so that the bright spots do not over expose as much as in past images. This not only allows more details to come out, but it portrays Ceres’ very dark surface more accurately. Even so, the image still shows that surface as brighter than it actually is. 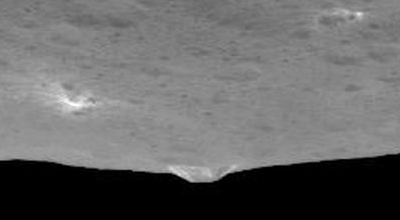 The press release also described a second image, showing a single lonely mountain on the planet’s horizon, rising up three miles from the planet’s surface, shown in the cropped image to the left. Overall this image, as well as the others, suggest that the surface of Ceres is generally far less rough than we should expect.

Another science mystery to unravel!