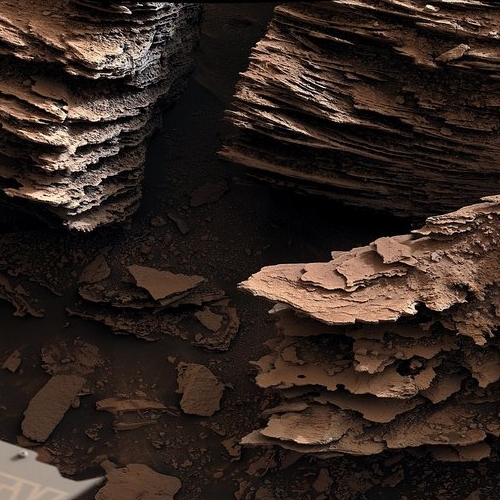 In a press release today, the Curiosity science team provided a major update on the rover’s recent travels in the mountain foothills of Gale Crater.

First and foremost was the new information about the rover’s wheels, which was buried near the bottom of the release:

The rover’s aluminum wheels are … showing signs of wear. On June 4, the engineering team commanded Curiosity to take new pictures of its wheels – something it had been doing every 3,281 feet (1,000 meters) to check their overall health. The team discovered that the left middle wheel had damaged one of its grousers, the zig-zagging treads along Curiosity’s wheels. This particular wheel already had four broken grousers, so now five of its 19 grousers are broken.

The previously damaged grousers attracted attention online recently because some of the metal “skin” between them appears to have fallen out of the wheel in the past few months, leaving a gap.

The team has decided to increase its wheel imaging to every 1,640 feet (500 meters) – a return to the original cadence. A traction control algorithm had slowed wheel wear enough to justify increasing the distance between imaging.

It appears that while the rover’s wheel damage is still under control, the damage is also beginning to increase again, probably due to the much rougher ground Curiosity now travels across routinely.

The science team also revealed that on June 7 Curiosity had gone into safe mode for two days, due to an incorrect temperature reading in one sensor. While this issue does not appear serious, engineers are still not sure what caused it.

The release also included a plethora of images. Most will appear familiar to my readers, such as the panorama produced by the rover’s high resolution camera above and cropped to post here, as these views have already been featured on Behind the Black. The photo above and to the right, cropped to post here, has not been, and shows what the scientists describe as “layered, flaky rocks believed to have formed in an ancient streambed or small pond.”

As for the science, the release described the changing geology the rover is now seeing:

For the past year, NASA’s Curiosity Mars rover has been traveling through a transition zone from a clay-rich region to one filled with a salty mineral called sulfate. While the science team targeted the clay-rich region and the sulfate-laden one for evidence each can offer about Mars’ watery past, the transition zone is proving to be scientifically fascinating as well. In fact, this transition may provide the record of a major shift in Mars’ climate billions of years ago that scientists are just beginning to understand.

The clay minerals formed when lakes and streams once rippled across Gale Crater, depositing sediment at what is now the base of Mount Sharp, the 3-mile-tall (5-kilometer-tall) mountain whose foothills Curiosity has been ascending since 2014. Higher on the mountain in the transition zone, Curiosity’s observations show that the streams dried into trickles and sand dunes formed above the lake sediments.

Because the rover has now gained more than 25 meters since its last drill hole in November 2021, the team is preparing to do another. This will be the last drill sample from within the transition zone, and will contrast nicely with the last few, which occurred at the start and in the middle of the zone.