A place on Mars where lakes, snowfall, and rivers once existed
November 30, 2020 2:19 pm Robert Zimmerman 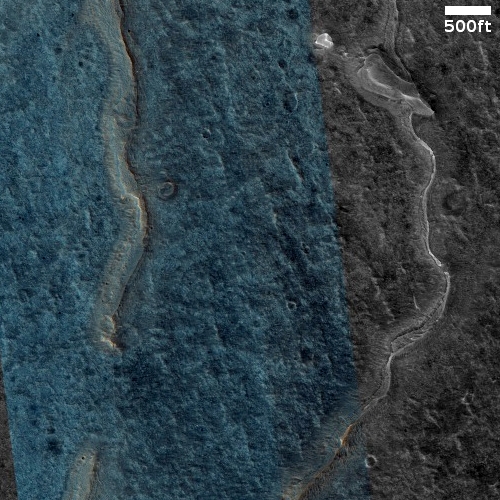 Cool image time! The photo to the right, cropped and enhanced to post here, attracted my immediate interest when I was going through the November image dump from Mars Reconnaissance Orbiter (MRO) because of its meandering sharp ridges, estimated to be about sixty feet high on average. While I have previously posted MRO images of inverted channels such as these, their particular sharpness, plus their large number in this localized single image, aroused my curiosity. What is their history? Does this illustrate an particularly interesting place on Mars?

The picture itself was taken was on September 29, 2020 by MRO’s high resolution camera. The blue areas in the color strip probably indicate coarser-grained surface. This makes sense, as these ridges are believed to have been initially carved as channels by flowing water or ice, which compressed their riverbed and thus made it resistant to erosion. Over time, the surrounding terrain eroded away, leaving that channel behind now as a upstanding ridge. The surrounding eroded terrain should thus be expected to be rougher.

Where did the water for these rivers come from, however? As always, the overview maps below give the context, and a possible explanation. 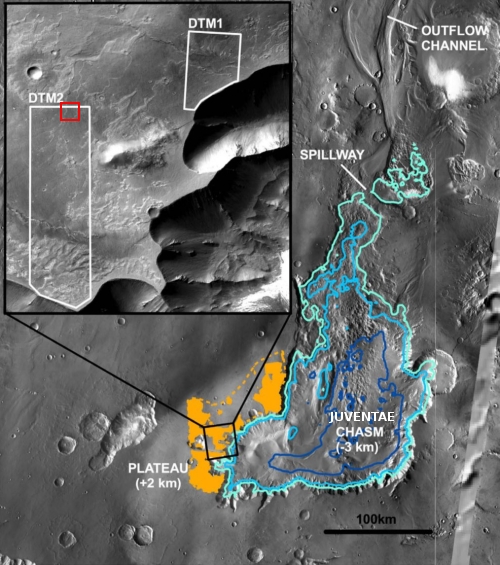 The first map is figure four from this paper [pdf], published in 2011. The red box indicates the location of the image above. These inverted channels are found in the orange areas to the west of the sixty-mile-wide and three-mile deep Juventae Chasma.

The second map is a wide overview, showing the location of Juventae Chasma north of Valles Marineris.

What scientists think happened is that in the past an intermittent lake of varying depth, as indicated by the blue lines, would come and go in Juventae Chasma, at intervals separated by 100 to 100,000 years, with the lakes themselves possibly lasting as long at 10,000 years.

All these numbers however remain very rough estimates. As planetary scientist Edwin Kite of the University of Chicago, who requested this image and has studied this region previously, explained to me in an email,

We don’t know how long the lakes lasted. Theoretical estimates based on the hypothesis that the lakes were filled by groundwater discharge give order-of-magnitude numbers. If we sent a rover to Juventae Chasma, then
with luck we could find geologic evidence that would give better constraints.

While they existed, their water would sublimate away, and be blown westward due to the prevailing winds, where it would quickly fall as snow on the plateau just to the west of Juventae, and thus provide the water for carving these channels. As noted in this 2008 paper [pdf],

The concentration of inverted channels and associated layered sediments along the plains at Juventae and Ganges may be due to former precipitation resulting from local climatic effects, and/or to regional heatflow that triggered snowmelt in specific regions. This activity may have lasted on the order of 10,000 years to produce the drainage densities and network development observed at Juventae.

The cartoon above, figure three from the 2011 paper, illustrates this process. The “regional heatflow” is likely some intermittent underground volcanic heating, similar to what you find at a hot spring on Earth.

Of course, getting that water to melt and then flow as a liquid remains the big problem. Under present conditions, Mars’s temperatures and atmospheric pressure makes it impossible for liquid water to flow on the surface. Instead, that snow if heated should have simply sublimated away as a gas.

Much modeling has been done to try to create conditions in the past that would allow for this flowing water, but there is little consensus and much skepticism about these models.

Could glaciers have caused these channels? At present Kite is skeptical. As he explained, based on more recent “…higher-resolution data, we can now see that the large outflow channels in the circum-Chryse region include features, such as dry cataracts, that are not explained by glacial flow, but are easily explained by water floods.”

The Chryse region is the drainage plain where the floods poured from chasms and canyons in the Valles Marineris region.

Nonetheless, this data now suggests strongly that sometime in the past this region of Mars had snowfall, possibly flowing rivers, and a lake somewhere between Lakes Erie and Michigan in size.