Aristarchus Crater on the Moon
August 7, 2018 at 9:08 am Robert Zimmerman Points of Information 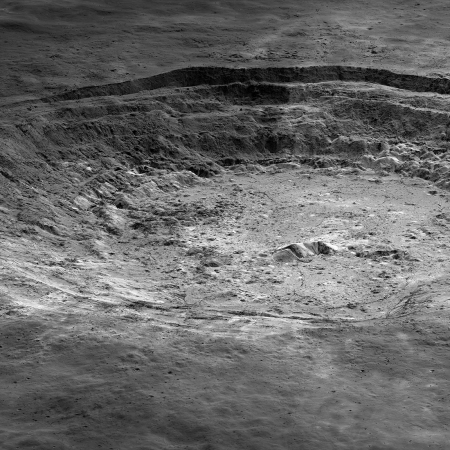 Cool image time! The image on the right, reduced in resolution to post here, shows Aristarchus Crater, one of the more geological intriguing locations on the Moon. This oblique image was taken by Lunar Reconnaissance Orbiter (LRO), still operating in lunar orbit. If you click on the image you can see the full resolution image.

Aristarchus crater is 40 kilometers (25 miles) in diameter and 2700 meters (1.7 miles) deep, with a central peak that rises 300 meters (almost a thousand feet) above the crater floor. When LRO pointed back towards the Sun, LROC was able to capture this magnificent view highlighting subtle differences in albedo (brightness). Some of the albedo contrast is due to maturity (young material is generally brighter than older material) and some reveal true differences in rock type. The central peak shows the complexity of what lies beneath the now hardened impact melt sea that filled the bottom of the crater.

The best part however is the close-up they provided of the crater’s central peaks, posted below. 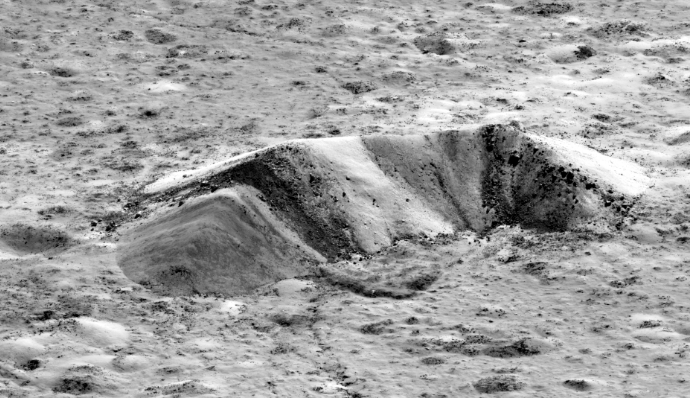 The number of fascinating features in this one image is astonishing. As noted by the LRO science team, “The banding seen in the central peak (3200 meters wide, 300 meters tall) is due to different rock types exposed during the impact event.” You can see this banding going up one side of the mountain and down its other side.

There are also a lot of boulders at the mountain’s base, as well as scattered on its slopes. The crater floor surrounding the central peak is also clearly impact melt, with fractures and cracks suggesting the possibility of underground voids. You can see one such fracture on the peak’s near side in the center of the image. The peak also features the crater’s unusually bright and dark features, seen also in this earlier LRO image.

The region around Aristachus contains lots of evidence of relatively recent volcanic activity. Over the decades astronomers have even thought they have detected flashes in this region. The region also contains a major rill flowing away from the crater.

Sadly, the Apollo mission that would have landed here was cancelled, and thus Aristarchus remains one of the prime landing sites for future exploration.