COVID-19 hospitalizations dropping across the board
June 26, 2020 9:55 am Robert Zimmerman 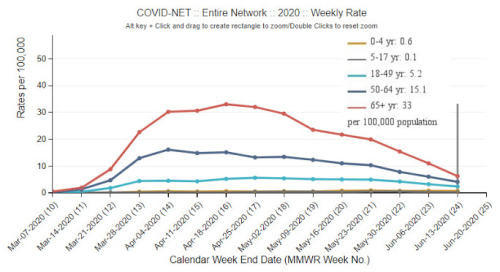 The graph to the right, produced weekly by the Centers for Disease Control and Prevention (CDC) and presently up-to-date through June 13th, bluntly shows why the panic over COVID-19 has been absurd and unjustified. (Hat tip Doug Ross @ Journal for noting it first.)

It shows the trends in Wuhan flu hospitalizations week to week, separated by age group. The only age groups seriously impacted by the disease have been those over 50. The cohorts under seventeen do not even register on the graph. Moreover, these are numbers per 100,000. Even at its worse, the disease only put about 30 people (over 65) out of every 100,000 into the hospital. Though maybe a bit higher it is hardly different than what we see normally during any normal flu season. It is also, like what we see during flu season, hardly something to panic over.

The graph also shows that the disease’s impact is clearly fading, across the board, even as the number of identified cases is rising. Even in the 18-49 cohort, which is right now experiencing the greatest rise in new cases, the hospitalizations are dropping, to about 2 or 3 people out of every 100,000.

This is not something to fear. It certainly does not justify the nullification of the Constitution and the Bill of Rights. Nor does it justify the requirement that everyone go about their lives wearing a mask, which not only does nothing to stop the disease but probably increases everyone’s chances of getting sick.

Doug Ross in his post on this graph I think summarizes the situation best:

You gots it, Sparky. The key metrics indicate that overall, the U.S. is crushing the China scourge. Of course, the media — whose singular goal is the destruction of the Constitution — wants to shriek about the growth of “positive test results”, not hospitalizations or mortality. But that’s what the media do. They aren’t about objective facts, or news, they’re about promoting fascism. Ain’t that right, Acosta?