Cracks and scallops on the lowland plains of Mars
August 28, 2020 at 2:37 pm Robert Zimmerman Points of Information 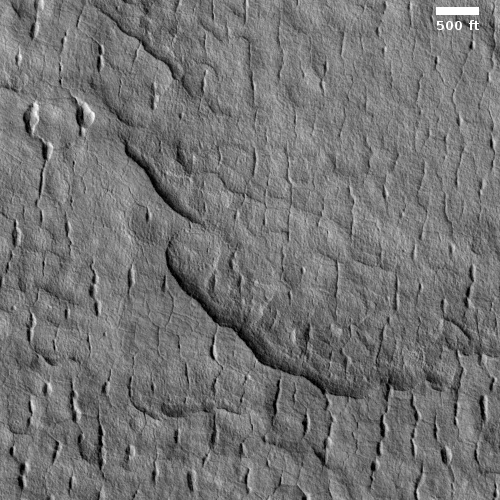 Cool image time! To the right is some of the strange terrain seen in the northern lowland plains of Mars. The photo, cropped to post here, was taken on May 4, 2020 by the high resolution camera of Mars Reconnaissance Orbiter (MRO) of an area in the northwest part of Utopia Planitia.

Next year China’s first attempt to soft land a rover on Mars will occur somewhere in Utopia Planitia. Utopia Planitia, also called Utopia Basin, is quite large, however, and in fact is the largest recognizable impact basin on Mars, with a diameter of more than 2,000 miles or about two thirds the width of the United States. If this strange spot was put near Seattle, Tianwen-1 is expected to touch down somewhere near Houston, Texas.

The MRO science team labeled the image “Scalloped terrain in Utopia Planitia.” The curved cliffs in the image illustrate those scallops, found frequently in Utopia. Their formation is believed related to the sublimation of underground ice, changing directly from ice to gas. The theories of this process however are somewhat uncertain at this time.

What stuck me about the image were the north-south oriented cracks. They extend through the full image, all oriented in the same direction. I haven’t the faintest idea what caused them, but they are intriguing, are they not?

This terrain is also different than most Utopia Planitia images I have previously posted. Most look squishy and blobby and distorted, suggesting the presence of soft slush and underground ice. This image instead suggests hard bedrock, even though it is farther north than the previous images and should thus be expected to have more ice underground. Quite mysterious.

I suspect the ice is here, but is simply not made obvious by any surface event. Then again, who knows? The geology of Mars is definitely not obvious, no matter how obvious it sometimes seems.