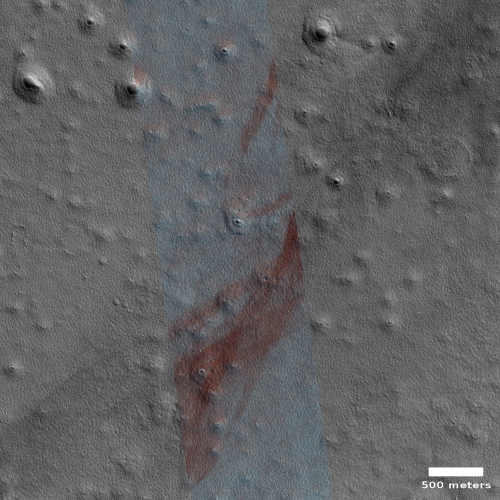 Cool image time! The photo to the right, cropped and reduced to post here, was taken on October 27, 2020 by the high resolution camera on Mars Reconnaissance Orbiter (MRO). It was taken not for any particular research project, but as one of the periodic images the camera team needs to take maintain the camera’s proper temperature. When they need to do this, they often will take a picture in an area not previously viewed at high resolution. Sometimes the image is boring. Sometimes they photograph some geology that is really fascinating, and begs for some young scientist to devote some effort to studying it.

In this case the photo was of the generally featureless northern lowland plains. What the image shows us is a scattering of impact craters that appear to have cut into a flat plain likely saturated with ice very close to the surface.

How can I conclude so confidently that these craters impacted into ice close to the surface? The location gives it away. 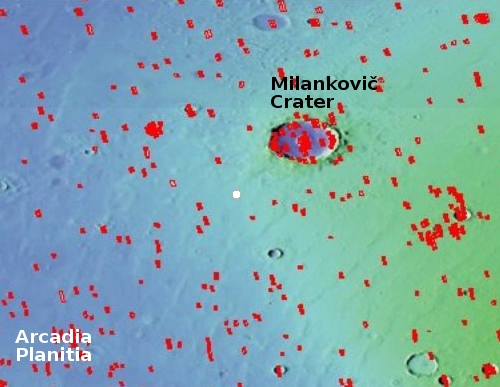 The photo’s location is shown by the white dot in the center of the overview map to the right. The red marks indicate other MRO high resolution images. As you can see, very few high resolution images have been taken in this area, which is why the camera team probably took it, to help fill this gap.

At 52 degrees northern latitude, this spot is high in the mid-latitude bands where scientists have detected much evidence of glacial ice. Some of that evidence are the ice scarps found only 110 miles to the northeast inside Milankovič Crater.

Then there is the Starship prime candidate landing zone about 660 miles to the southwest in Arcadia Planitia, with the Erebus Mountains about 150 to 200 miles beyond to the west. This icy region is where one scientist has said, “I think you could dig anywhere to get your water ice.”

Many of these small craters are probably secondary impacts from the event that created Milankovič Crater. Looking closely at the full image we can see what appears two scattered impact events. The many small impacts from the earlier event are now faded with time and erosion. The newer event produced the sharper craters that appear to have plunged into slushy ice. 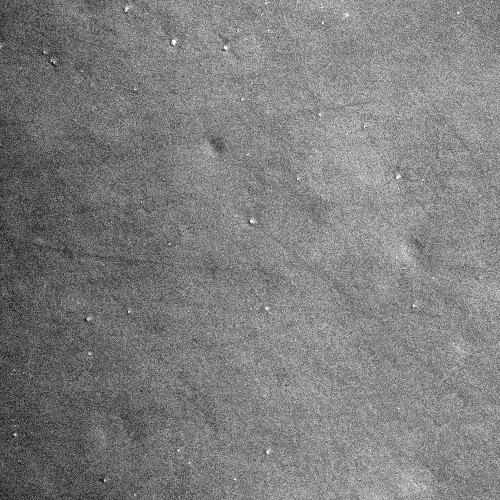 Then there is the red streak that cuts across the photo. This is almost certainly a dust devil track. Red in MRO color strips usually indicates dust [pdf], while the blue likely indicates ice.

The image to the right, cropped to post here, was taken by MRO’s context camera and covers a wider area in the same general region. You can see many such dust devil tracks cutting across this mostly featureless plain. There is also a hint that the tracks are repeating over the same tracks, a phenomenon of favoring specific ground and seen elsewhere on Mars and not at present completely understood.

As always, even a relatively boring place on Mars yields fascinating mysteries.