Golfing with boulders on the Moon
July 27, 2019 at 12:20 pm Robert Zimmerman Points of Information 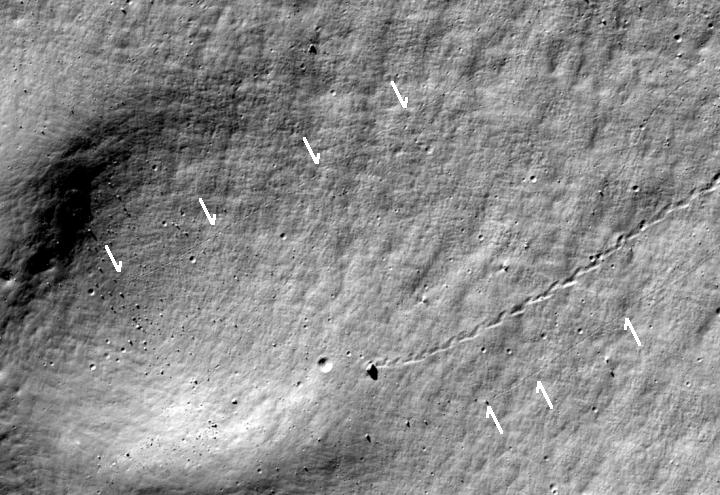 Cool image time! The Lunar Reconnaissance Orbiter team this week released a beautiful image of boulder tracks rolling down the inside slope of 85-mile-wided Antoniadi crater on the far side of the Moon. The image above, cropped, reduced, and annotated to post here, shows these tracks.

The most obvious track is cool because the boulder almost made, as the scientists note, “a hole-in-one.”

…Had it rolled just 75 meters more, the boulder might have plopped neatly into a 30-meter-diameter young impact crater on the floor of the partially erased crater.

The arrows I have added indicate two more less obvious boulder tracks. If you click on the full resolution image and zoom in you can also see another series of impressions in the middle of the photograph that look like a dotted line, suggesting they were left by a boulder bouncing down the slope.

The scattered of boulders in the floor of the small crater all likely came from the top of the big crater’s rim, which I show in the wider image below. 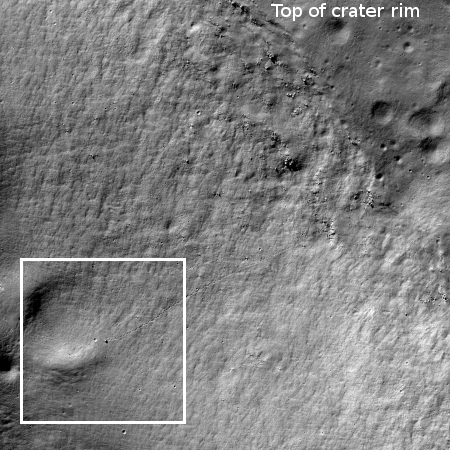 The box indicates the location of the image above.

While many things over the eons could caused these boulders to roll (moonquakes, erosion from the solar wind, other nearby impacts), a close look at the ground surrounding them does not show tracks emanating from most, suggesting they have been there a very long time, long enough for the surface reworking caused by the solar wind to have smoothed those tracks out.

The Moon is airless and mostly dead. The solar wind is incredibly weak. Any changes caused by it will take a lot of time. Consider the time required to smooth out those tracks. The mind boggles.