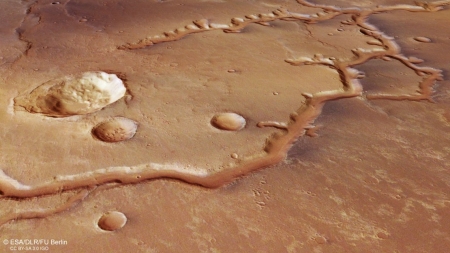 The Mars Express science team today released a mosaic produced by the orbiter’s high resolution camera of the 300 hundred mile long relic river valley Nirgal Vallis. The image to the right, reduced to post here, is the oblique view that was produced by computer using the camera’s stereo images.

This ancient valley system is named Nirgal Vallis, and was once filled with running water that spread across Mars. By exploring the characteristics of the surrounding craters, scientists estimate the system’s age to be between 3.5 and 4 billion years old.

The part of Nirgal Vallis captured in these images lies towards the western end of the river system, where it is slowly spreading out and dissipating; the eastern end is far less branched and more clearly defined as a single valley, and opens out into the large Uzboi Vallis – the suspected location of a large, ancient lake that has long since dried up.

Nirgal Vallis is a typical example of a feature known as an amphitheatre-headed valley. As the name suggests, rather than ending bluntly or sharply, the ends of these tributaries have the characteristic semi-circular, rounded shape of an Ancient Greek amphitheatre. Such valleys also typically have steep walls, smooth floors, and, if sliced through at a cross-section, adopt a ‘U’ shape. The valleys pictured here are about 200 m deep and 2 km wide, and their floors are covered in sandy dunes; the appearance of these dunes indicates that martian winds tend to blow roughly parallel to the valley walls.

Unlike the high resolution camera on Mars Reconnaissance Orbiter (MRO), which is for taking close-up images of specific surface features, Mars Express is producing a high resolution survey of the entire planet. Its camera does not have quite the same resolution, but as it is taking wider images that’s okay.

What is unfortunate is the European Space Agency’s policy for releasing those images. Unlike MRO, they do not make them all available to the public instantly. Instead, they periodically do press releases like today’s, highlighting a specific region or single large feature. As a result, Mars Express does not get the press it deserves.