Mars’ polar ice canyons are young and the source for mid-latitude ice
March 25, 2021 9:40 am Robert Zimmerman 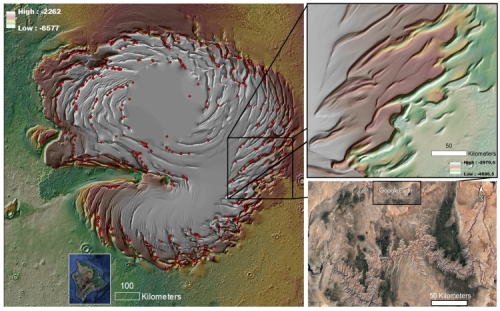 Scientists have now proposed that the giant ice canyons seen at the edges of Mars’ polar ice caps are very young and are also the source of the water that sublimates away when the planet’s rotational tilt (its obliquity) is high, to fall as snow in the mid-latitudes where it forms the glaciers and ice sheets we now find there.

The image to the right, reduced to post here, shows the entire north pole ice cape on the left, with its spiral canyons. The two inserts on the bottom show for scale Hawaii’s Big Island and the Grand Canyon. From the release:

“Erosion formed a huge ice canyon system, and that erosion is a source of the long-known mid-latitude mantles on Mars,” said Rodriguez, lead author of “North polar trough formation due to in‑situ erosion as a source of young ice in mid‑latitudinal mantles on Mars” that appears in Nature Scientific Reports.

The troughs are arranged in a vast spiral pattern covering an area the size of Texas. We find that their growth lateral to katabatic wind (wind that carries high-density colder air from a higher elevation down a slope) directions produced widespread simple intersections, from which the highly complex spiral arrangement emerged, Rodriguez said. “The spiral pattern seen in the troughs is basically an erosional byproduct,” he said. “As the pits grow and intersect over a pre-existing dome-shaped polar cap, the spiral pattern emerges.

“It has long been proposed that sublimation of water ice from the north polar cap during high-obliquity cycles was an essential source of the planet’s mid-latitude icy plains. Our finding identifies the troughs as direct evidence of those sublimation phases,” Rodriguez said.

These spiral trough features formed very recently, in geologic terms: between a few million and 50,000 years ago, Rodriguez said.

This hypothesis, if true, is very important in understanding the long term geological history of Mars. The present theory is that when the obliquity rises to as high of 60 degrees, compared to today’s 25 degrees (similar to Earth’s), the mid-latitudes are colder than the poles, and the ice at the poles then migrates to the mid-latitudes. This paper gives us the place at the poles where the icecap shrinks as that ice sublimates away.

Knowing that these polar canyons are young and the source of the mid-latitude ice scientists can now begin to write the geological history of the polar ice caps themselves. They can also use this information to maybe determine whether the caps are presently in a steady state, as now believed, or growing or shrinking.

The youth of these canyons also suggests that any mid-latitude ice from them is also young, and thus more likely pure water unpoisoned by the toxic perchlorates found in many places on the Martian surface. It will thus be easier to obtain pure drinkable water from them.