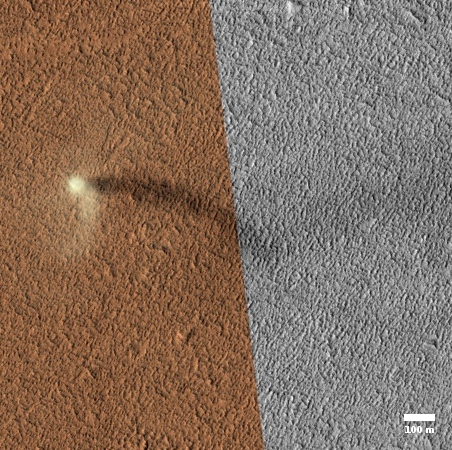 Cool image time! The science team for the high resolution camera today posted a new captioned image, cropped by me to the right to post here, showing an active Martian dust devil as it moves across the surface of Mars.

Dust devils are rotating columns of dust that form around low-pressure air pockets, and are common on both Earth and Mars. This Martian dust devil formed on the dust-covered, volcanic plains of Amazonis Planitia. The dust devil is bright, and its core is roughly 50 meters across. The dark streak on the ground behind the dust devil is its shadow. The length of the shadow suggests the plume of rotating dust rises about 650 meters into the atmosphere!

That’s about 2,100 feet tall, almost a half mile in height. The location, Amazonis Planitia, is part of the northern lowlands of Mars, flat and somewhat featureless. It is also somewhat near the region near Erebus Montes that is the candidate landing site for SpaceX’s Starship rocket, a region that appears to have a lot of ice just below the surface.

The science team also linked to a 2012 active dust devil image that was even more spectacular. I have also posted on Behind the Black a number of other dust devil images, highlighting this very active, dramatic, and somewhat mysterious aspect of the Martian surface:

Take some time and read the various posts while admiring the various cool images. They will invigorate you, showing clearly the wonderful mystery of our universe, which while inanimate seems often to act as if it is alive.