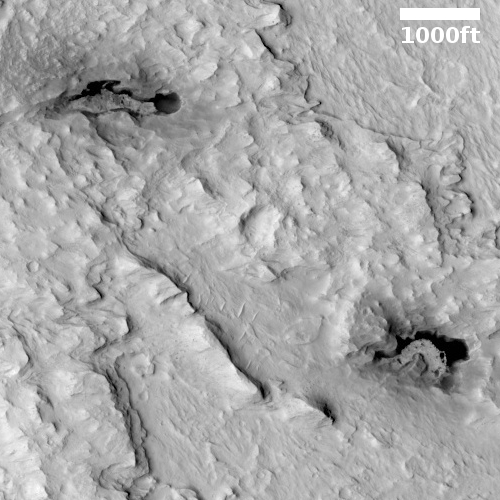 Cool image time! The photo to the right, cropped to post here, was taken on January 2, 2021 by the high resolution camera on Mars Reconnaissance Orbiter (MRO). It shows a windswept sandy region of ridges and dunes with two dark features nestled between ridges.

What are these dark patches? At the available resolution they appear to be deep pits, with the one on the right having a significant overhang. And if these are pits, they would appear significantly different than most of the previously identified Martian pits, which are usually somewhat circular in shape. These features have very complex shapes, as if the pit is conforming itself to the terrain that surrounds it.

The resolution, however, is not good enough to confirm this interpretation. These dark patches could also be exposed volcanic material, darker than the surrounding terrain. The location, as shown in the overview map below, adds weight to this interpretation.

The white cross indicates the location of these dark features, placing them inside the Medusae Fossae Formation, the largest deposit of volcanic ash on Mars. In other places in or near this formation where dust devils have blown the ash away the underlying volcanic material appears darker, though not exactly like this.

There is a third possibility, though more unlikely. These dark features might be volcanic vents, as this location is also located in what I like to label Mars’ volcano country. This is the least likely hypothesis, however, as the features bear little resemblance to other vents that I have seen so far on Mars. Can’t rule it out, however.

Ah, the uncertainty of science. Makes you want to go there and dig a little deeper to find out what these really are, doesn’t it?