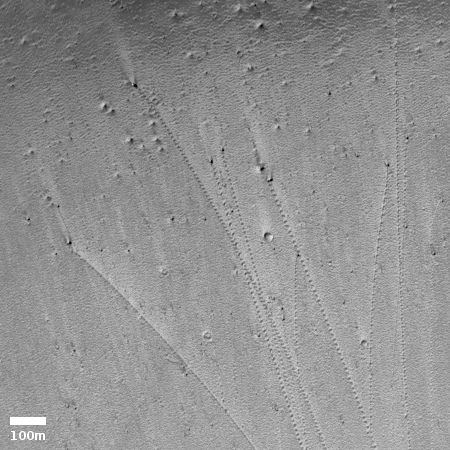 Cool image time! The photo to the left, cropped to post here, was taken by the high resolution camera on Mars Reconnaissance Orbiter (MRO) on January 21, 2020, and shows several boulders at the bottom of a slope, along with the tracks those boulders made as they rolled downhill sometime in the far past.

Uphill is to the south. We know the dark spots at the end of these tracks are large boulders partly because of the wind streaks emanating away from them to the north. As the wind goes around each rock it produces eddies that produce the tracks. Based on the scale and the image resolution (about 10 inches per pixel), these boulders range in size from about one to five feet in diameter.

This image has two points of interest. First, the tracks left by the boulders seem to have a repeating pattern. My guess is that the pattern most likely formed because the boulders are not spherical in shape, and as they rolled each roll repeated a certain pattern reflecting that shape. This theory is reinforced by a close look at each boulder. Though the resolution is insufficient to resolve the boulders themselves, the pixel distribution for each strongly suggests an asymmetric shape.

Second, this image, when compared with an earlier MRO image of the same spot, taken fourteen years ago in December 2006, shows no obvious change. These tracks, and their boulders, have therefore probably sat here, as we see them, for a long time. Since there appear to be two sets of tracks, with one overlying the other, this suggests that two separate events (an earthquake or nearby impact) each time caused a bunch of boulders to break free and roll downward together, with the second set of boulder tracks crossing over the earlier set.

Establishing when those two events occurred, however, will require some on-site data, something that will likely not occur until humans roam the surface of Mars in large numbers.